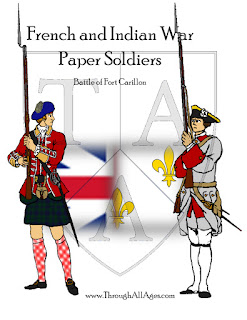 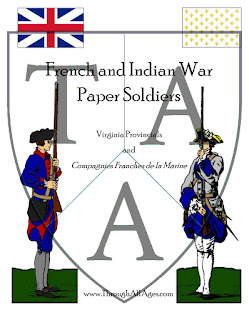 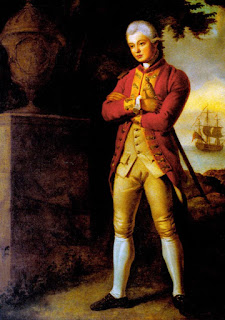 and Highlanders at Fort Pitt
Redcoats in the forest
Posted by Ralphus at 09:12 1 comment:

Here
Posted by Ralphus at 09:33 No comments:

The Battle of Okeechobee Reenactment from Into Nature Films on Vimeo.


From the wiki
The Battle of Lake Okeechobee was one of the major battles of the Second Seminole War. It was fought between 800 troops of the 1st, 4th, and 6th Infantry Regiments and 132 Missouri Volunteers (under the command of Colonel Zachary Taylor), and between 380 and 480 Seminoles led by Billy Bowlegs, Abiaca, and Alligator on 25 December 1837. The Seminole warriors were resisting forced relocation to a reservation out west. Though both the Seminoles and Taylor's troops emerged from the battle claiming victory, Taylor was promoted to the rank of Brigadier General as a result, and his nickname of "Old Rough and Ready" came mostly due to this battle.
Posted by Ralphus at 02:55 No comments: 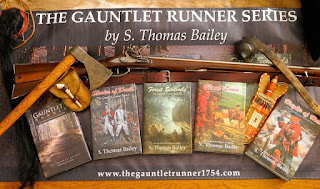 'In the epic tradition of ‘Saving Private Ryan’, ‘Unforgiven’, ‘The Last of the Mohicans’, and ‘Spartacus’, S. Thomas Bailey captures the essence of the French and Indian War period in his stark, unromanticized depiction of the early Colonial America. The award-winning series, The Gauntlet Runner transports readers back to a time when early settlers risked their lives to expand a young, growing nation.'
Webpage
Posted by Ralphus at 07:48 No comments: 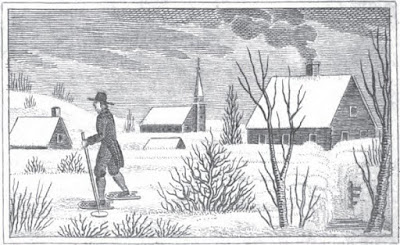 Read about it here
Posted by Ralphus at 05:59 No comments: 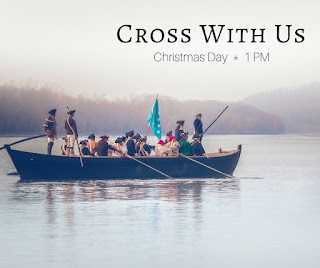 Don't forget: George and his troops cross the Delaware at 1 PM on Christmas Day.

Photo by Jimmy Kastner
Posted by Ralphus at 09:23 No comments: 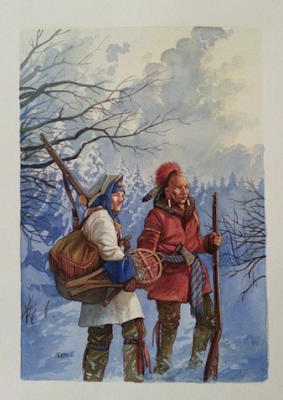 Have a merry christmas

Canadian militiaman on snowshoes
Posted by Ralphus at 08:55 2 comments: 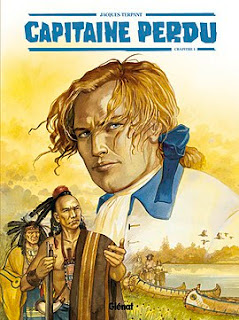 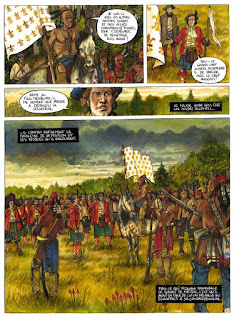 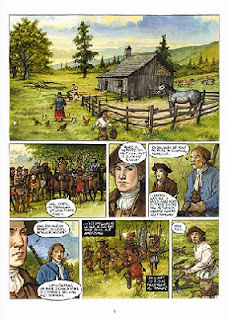 From here
'Fort Ticonderoga is thrilled to announce the recent acquisition of an important painting of the French military on campaign from the mid-18th century. The work depicts a French regiment camped in hilly terrain of the Italian Piedmont during the final campaigns of the 1740-1748 War of Austrian Succession. This painting is an internationally significant addition to the museum’s collection and an important document of military and material culture during the Ancient Regime with a direct connection to the French soldiers that built and served at Fort Carillon (later named Ticonderoga) during the French and Indian War (1754-1763).
The campaign depicted in the painting involved French forces advancing into Northern Italy. These French troops suffered a shocking defeat at the hands of numerically inferior Piedmontese troops at the Battle of l’Assietta. The Marquis de Montcalm also served during the campaign depicted in the painting, where he was wounded during the battle, his final field command prior to his service in Canada. The painting represents the camp of the Royal Roussillon Regiment, identifiable by their uniforms which follow the January 19, 1747 regulations. This regiment later served and wore the same uniforms at Fort Carillon from 1756-1758, including the climactic battle on July 8, 1758, making this one of the very few surviving contemporary images of French regiments that saw service in North America.
This painting serves not only as a detailed glimpse into a French military encampment, but represents a campaign that may have served as a lesson for the Marquis de Montcalm of how a small, well-entrenched force could defeat a much larger army. The lopsided victory at l’Assietta in 1747 shares some striking similarities with the later battle at Ticonderoga in 1758, including the presence of Montcalm as well as four of the infantry regiments that had fought in Italy, one depicted in this painting.
“The intricate detail of the painting is a remarkable window into daily life in the French military,” said Fort Ticonderoga’s Curator Matthew Keagle. “It illustrates in full color many of the details of camp life depicted in the engravings of military manuals in the Fort Ticonderoga Museum’s library collection. The level of detail allows the identification of numerous examples of objects from soldiers’ muskets to powder horns to eating utensils that match examples recovered archaeologically at Fort Ticonderoga.”
Fort Ticonderoga holds one of North America’s premier collections of 18th-century military material culture. This painting adds immensely to the museum’s holding of French material. Exhibits across the museum’s campus contain thousands of objects and tell thousands of stories, narrating the history of Fort Ticonderoga from the military culture of the 18th century to the reconstruction of the fort in the 20th century. The painting will be on display during the museum’s 2016 season in the Deborah Clarke Mars Education Center.'
Posted by Ralphus at 13:32 No comments:

The other day I posted a pic of two redcoat officers - one Light Infantry - well they're still going - the Corps of Light Infantry here's their informative website
Posted by Ralphus at 09:48 No comments: 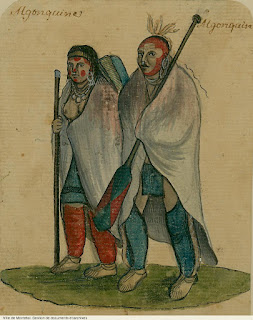 Thanks to a reader I was able to find this
Posted by Ralphus at 06:56 No comments: 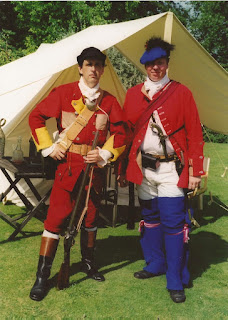 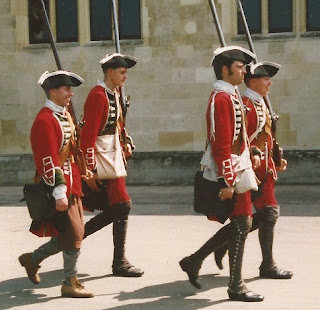 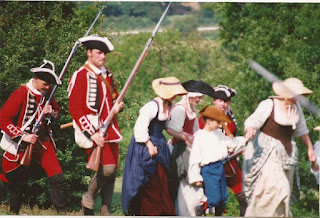 These images are from the late 9s and feature the 36rh. The 36th regiment was not in service in America in the SYW but that didn't stop them reenacting as a generic redcoat unit.
Posted by Ralphus at 09:26 No comments:

A couple of F&I pictures by Ralph Mitchard 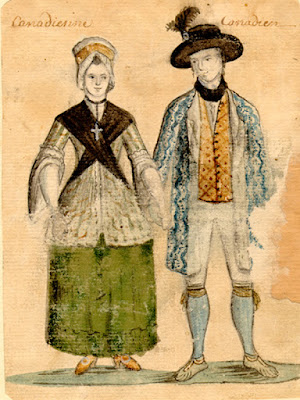 From Breadalbane to Brucker Muhl 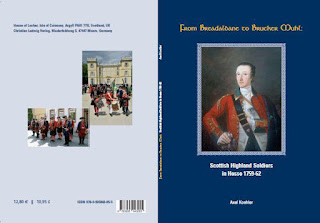 Scottish Highland Soldiers in Hesse 1759-62
I've just put this on my Christmas list. It's the story of the Highland soldiers in Hesse Germany during the SYW. Details here where you can buy it. Available in English or German versions. FB Page 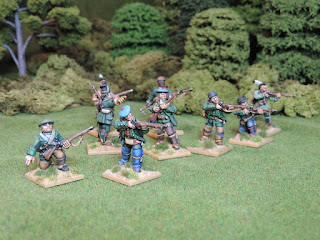 This is a great page with lots of photos of GM figures and so on.
Posted by Ralphus at 04:02 No comments:

More French forces by me 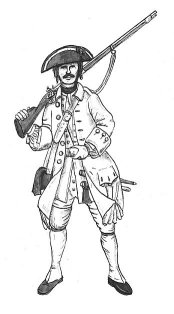 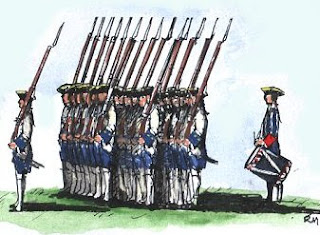 Revolution (battle in America. Movie from 1985)

A battle in America from the movie Revolution (Directed by Hugh Hudson. 1985 with Al Pacino, Donald Sutherland, Nastassja Kinski, Joan Plowright))
Posted by Ralphus at 05:20 2 comments:

Norm recommends this blog - looks good
A place for information about British soldiers who served during the American Revolution, 1775-1783. Thousands of soldiers wore red coats, but little is known about them as individuals. This site will change that, soldier by soldier.
Posted by Ralphus at 01:32 No comments:

Peter Rindisbacher, Captain Bulger, Governor of Assiniboia, and the Chiefs and Warriors of the Chippewa Tribe of Red Lake, in Council in the Colony House in Fort Douglas, May 22nd, 1823, 1823. M965.9 © McCord Museum 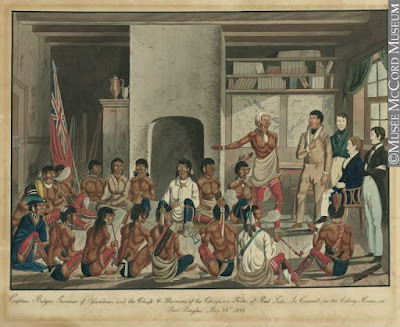 From here
Posted by Ralphus at 04:48 No comments: 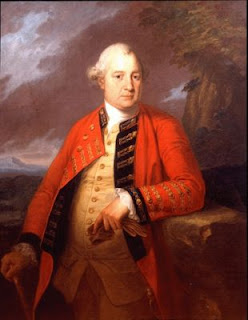 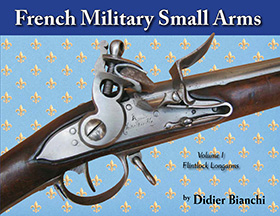 BIANCHI (D.)
N002
£35.50
134pp., landscape 4to, fully illus.throughout with detailed colour photos., P.B. 2015.
The same style as Eric’s book on the Brown Bess. The most extensive guide to French flintlock military long arms ever to appear in English. Concentrates on identification and service use, covering everything from Infantry Muskets, Rampart Guns, Dragoon Muskets, Cavalry Musketoons, Constabulary Musketoons, Naval Muskets, Hussar Musketoons, Foot and Mounted Grenadier Muskets, Arms of the Mameluks, Lancers’ Musketoons, Royal Muskets, Muskets of the Bodyguards and much more. Buy here
Thanks to Lace Wars for the heads up
Posted by Ralphus at 03:57 No comments: 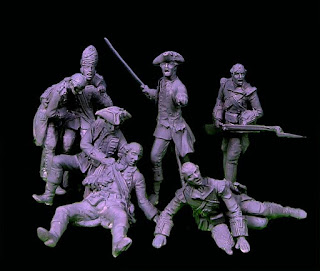 Now available here:
http://www.oniriaminiatures.com/…/braddocks-defeat-at-mono…/
We say good bye to 2015, with this long waited release:
Title:Braddock’s Defeat at Monongahela (set#2)
Scale/size: 28mm
Material: Metal
Sculptor: Antonio Zapatero Guardini
The Great Guardini has once again surpassed his sculpting standards and has created this breath taking set of figures. With Just these four figures alone or (even better) if combined with set#1 you will be able to create an action packed vignette depicting this military blunder occurred during the French & Indian war. 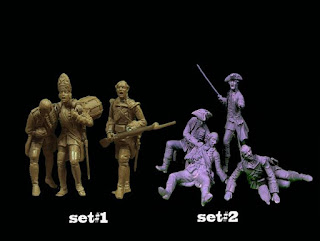 'We are deep into planning a commemoration and celebration of our town's 250th anniversary.

Captain Jonathan Longfellow built the first known permanent home & stockade in Deerfield, about 1744.  Militia were stationed there and commissioned to patrol the then frontier a good ways north and south for several years during the French and Indian War.  They were advanced ball and powder by the Colonial Governor to be repaid with bounties due on any scalps they took.

Our big celebration will be July 16-17 on the Deerfield Fairgrounds (a lot of space!)..  We would love to bring in some Revolutionary War or other reenactors for an encampment, participation in our parade, and demonstrations.  We have a sponsor, would pay reasonable fees and be the finest hosts we could manage in every respect.'

Brebeuf and the Huron Carol

'This is a historical docu-drama video on the life of Jean de Brebeuf which I started as a personal project. Produced on an extremely low budget by Robert Sandler, Directed, shot and edited by me, (Peter Elliott), Brebeuf and the Huron Carol attempts to tell a two hour long story in forty six minutes. It was broadcasted on CBC and APTN back in 2002.The original music was composed and performed by Cathy Elliott with music rights acquired from Robbie Robertson, The Nylons and Bruce Cockburn, Don Ross, Toronto Consort and the Toronto Children's Chorus.'
Posted by Ralphus at 05:45 No comments: