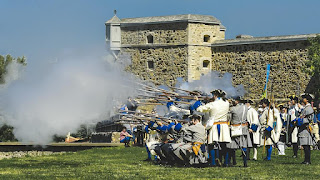 Photo by CHAMBLY PHOTO
There's not a lot of good stuff in English on the CfdlM but this article on Recruitment and daily life is worth a read.
Apparently the info I posted about Chambly was incorrect. Apparently The stone fort, the fourth fort on the same site, was built in 1709-1711. It was restored to its 1750s appearance in the early 1980s. The first three forts were wooden pallisades with inner buildings, the first dating from 1665.
Posted by Ralphus at 06:46