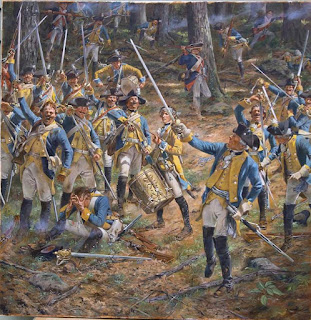 'The Brunswick Dragoons at the battle of Bennington Vermont. Lt. Col Baum is ordering his men to draw their broadswords to try to cut their way out. Didn't work and Baum was mortally wounded. Four of the enlisted dragoon swords and one officer's sword still survive . They captured ones were issued to the 2nd Continental Light Dragoons. '
From the forthcoming book on the Saratoga campaign.
Pennington wiki
https://en.m.wikipedia.org/wiki/Battle_of_Bennington
Posted by Ralphus at 07:01