Last of the Mohicans - silent version from 1920

I thought we'd had this version before but from searching this blog it appears not so here it is. You can add your own soundtrack. It's quite enjoyable - see what you think. IMdb 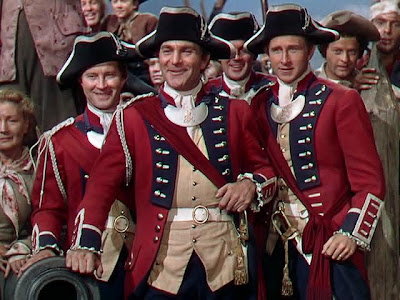 If you fancy reading a comprehensive review of this forgotten masterpiece then go to this blog where there are plenty of stills like this one of Royal Americans and one of Boris Karloff as Seneca chief Guyasuta.
- March 24, 2011 1 comment:

This is great - a fan trailer for the epic movie set during the rebellion of Pontiac. It is basically the first five minutes of the film but it is worth watching to get a taste of this 1947 movie great. 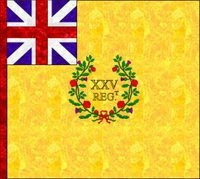 Website here - English language version available
If you want to see some photos go here or go to their Facebook page
They look like a great unit - meant for the European theatre of course but maybe they should hook up with the Czech groups?
History of the regiment from Project SYW
- March 17, 2011 No comments:

French and Indian war in the UK

New France and Old England have published their events for 2011. Check them out here
- March 17, 2011 No comments:

Pennsylvania 1st and 3rd Battalions present. If you want to see more of this impressive unit go here and if you want to know more about Conrad Weiser - here's his wiki.

This website is of interest if you are in Britain and want to reenact the War of 1812 and recreate it for the bicentennial in 2012. They have an event June 1st at Dunbar so already going places.
- March 15, 2011 No comments:

Mutiny of Ansbach and Bayreuth regiments

Today in 1777 this event happened - according to the wiki

The Ansbach and Bayreuth regiments are remembered for a mutiny that occurred in Ochsenfurt. The soldiers were loaded onto boats on the Main River, but could not cross the bridge, which the Bishop of Würzburg refused to open. In the morning, 8 March 1777 some Ansbach soldiers managed to get to the bank of the river, and pulled the other boats to land. The officers tried to address their concerns, but some men deserted. Chasseurs were posted to keep men from deserting, and fired warning shots; the mutineers returned fire. When the Margrave of Ansbach received word of the riot, he rode through the night to get to Ochsenfurt. The Margrave convinced his soldiers to reboard the boats, and sailed with them as far as Mainz, where he succeeded in getting the bridge opened, without the consent of the Elector.[38]

The Margraf of Ansbach-Bayreuth was deeply in debt when the war broke out, and received more than £100,000 for the use of his soldiers.[34] In 1791 he sold both Ansbach and Bayreuth to Prussia and lived the rest of his life in England on a Prussian pension.[39]
- March 08, 2011 No comments: 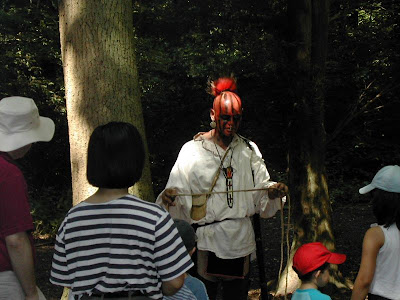 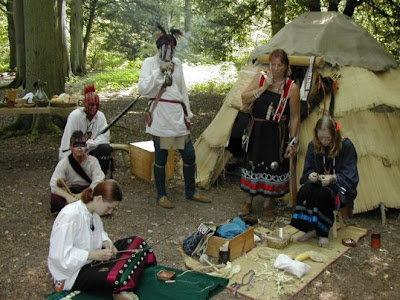 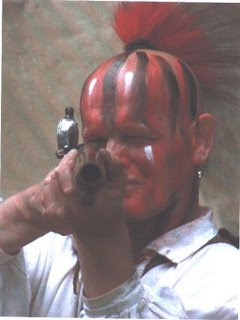 Some pics from about 10 years ago when I used to do this - this photos are of an event we did at Box Hill for the National Trust under the name 'The Woodland Indian Study Group'. The National Trust were very specific that they didn't want too much focussing on the scalping and the war side of things which suited us fine - I was a little fed up with the tendency to play to the crowd and have fake scalpings and various other bloody bits based on the Last of the Mohicans movie. We set the time period as the Revolution when Britain was allied to most Natives so they could be seen in the light of 'friends' rather than as a danger. I can't say the idea was hugely successful but the NT seemed happy enough. It's worth thinking about how one reenacts say the French and Indian war - it's easy to give a Hollywood treatment of indians - that is portray them as evil whereas it makes it more interest to confront stereotypes and stress the positive side of woodland Indian culture.
- March 05, 2011 3 comments:

Thanks to Steve Stanley for finding this - an online collection of woodland Indian items.
- March 02, 2011 1 comment: