Firelock games (who do the series Blood and Plunder) have mentioned they are working on figures for this era. They said
We plan on doing some new Native American units, Coureur De Bois, and Indian Fighters (works for Dutch Boslopers as well) for late 17th - early 18th century. Our No Peace Beyond the Line expansion for Blood & Plunder currently covers King Philips' War and King Williams War and we are presently working on a supplement to cover Queen Anne's War, including new units and factions for Woodland Native Americans that covers from King Phillips War to King George's War.

French troops at the Battle of the Plains of Abraham 1759 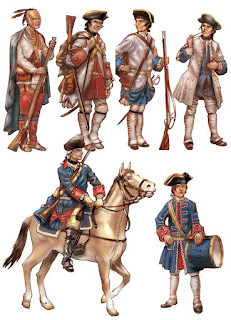 I think these are from a magazine called The Beaver.
- October 25, 2019 No comments:

Like to hear of new projects. Here's the Facebook page of a group that did their first event this year. 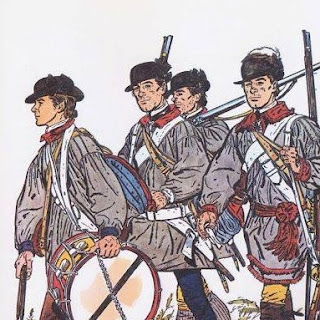 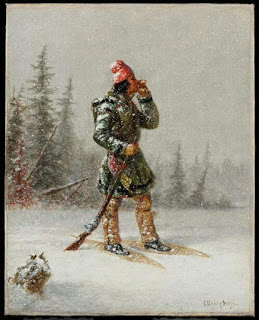 Set in what is now Quebec, this story is about Nicholas de Lugny (played by Michel Coté), a soldier bearing the hardships of a new land and learning how to live as a pioneer in New France. The Newcomers was a series of seven hour-long Canadian television specials that aired from 1977 to 1980 on CBC Television. These dramas explored the theme of Canada as a nation built by immigrants, spanning from the era before Canada was founded until modern times. The series was sponsored by Imperial Oil to mark the company's 100th anniversary in 1980. The series was produced by Nielsen-Ferns.[1] McClelland and Stewart published a related book in 1979.[2]
- October 17, 2019 No comments:

French troops in the American war of independence 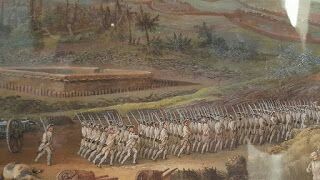 My Pinterest page for this https://pin.it/vckibjavaky5i2
Also see my blog https://sabreandbayonet.blogspot.com
- October 11, 2019 No comments:

Formed by longstanding reenactors and living historians, and with strong links to the Duke of Wellington's Regimental Museum, the group will portray a hat company of British infantry and its civilian followers, as it appeared in 1775 prior to its embarkation for America, and its subsequent distinguished service.

We will be working towards participation in the 250th Anniversary Commemoration of the American War of Independence, which will begin in 2025.

Our portrayal will use the latest research and we will equip to the highest standards. '

Hard to think of the St Francis raid without thinking of this film.
- October 04, 2019 1 comment:

Today's anniversary is the raid on the St Francis mission by Roger's Rangers. Wiki
- October 04, 2019 No comments:


'I'm a member of the Twisted Knot Company of Pike and Shotte, a re-enactor group in Central Pennsylvania specializing in the 16th–17th century, from the Elizabethan era to the English Civil War and early colonial America.
That's a little before your F&I War period, but we're working on our schedule of events for 2020 and looking for Woodland Indian re-enactors in the mid-Atlantic region who might be interested in a joint event. In the 1600s the lower Susquehanna Valley was a real battleground among the various English colonies, not to mention the Dutch, Swedes, French and Spanish.
If you're able to point me in the right direction (or any direction), it would be greatly appreciated.
We're online at
http://www.twistedknotcompany.com/
This is us taking 2nd place in the military display category at Military Through the Ages a year or two ago.' 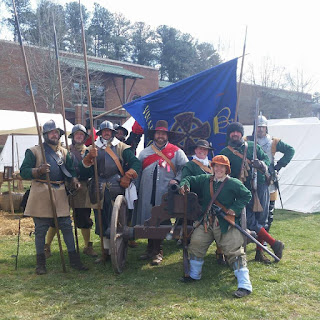 Thanks!
Don Hollway
(Lance-Presado Manfred Holweg, on the right above)
- October 02, 2019 No comments: