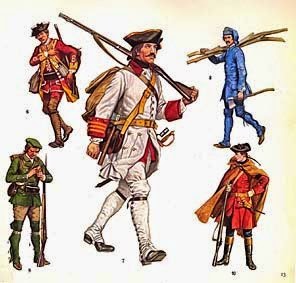 THE
Female Soldier;
Or, The Surprising
LIFE and ADVENTURES
OF
HANNAH SNELL,
Born in the City of Worcester,
Who took upon herself the Name of James Gray; and, being deserted by her Husband, put on Mens Apparel, and travelled to Coventry in quest of him, where she enlisted in Col. Guise’s Regiment of Foot, and marched with that Regiment to Carlisle, in the Time of the Rebellion in Scotland; shewing what happened to her in that City, and her Desertion from that Regiment.
ALSO
A Full and True Account of her enlisting afterwards into Fraser’s Regiment of Marines, then at Portsmouth; and her being draughted out of that Regiment, and sent on board the Swallow Sloop of War, one of Admiral Boscawen’s Squadron, then bound for the East-Indies. With the many Vicissitudes of Fortune she met with during that Expedition, particularly at the Siege of Pondicherry, where she received Twelve Wounds. Likewise, the surprising Accident by which she came to hear of the Death of her faithless Husband, who she went in quest of.
TOGETHER
With an Account of what happened to her in the Voyage to England, in the Eltham Man of War. The whole containing the most surprizing Incidents that have happened in any preceeding Age; wherein is laid open all her Adventures, in Mens Cloaths, for near five Years, without her Sex being ever discovered.
LONDON:
Printed for, and Sold by R. Walker, the Corner of Elliot’s-Court,
in the Little Old-Bailey. 1750. Price One Shilling.

Email ThisBlogThis!Share to TwitterShare to FacebookShare to Pinterest
Labels: redcoats

Lord Townshend's Instructions for the Light Infantry in Ireland, 1772

Here at the Revwar reenactors FB page
By Steve Rayner
- February 26, 2015 No comments: 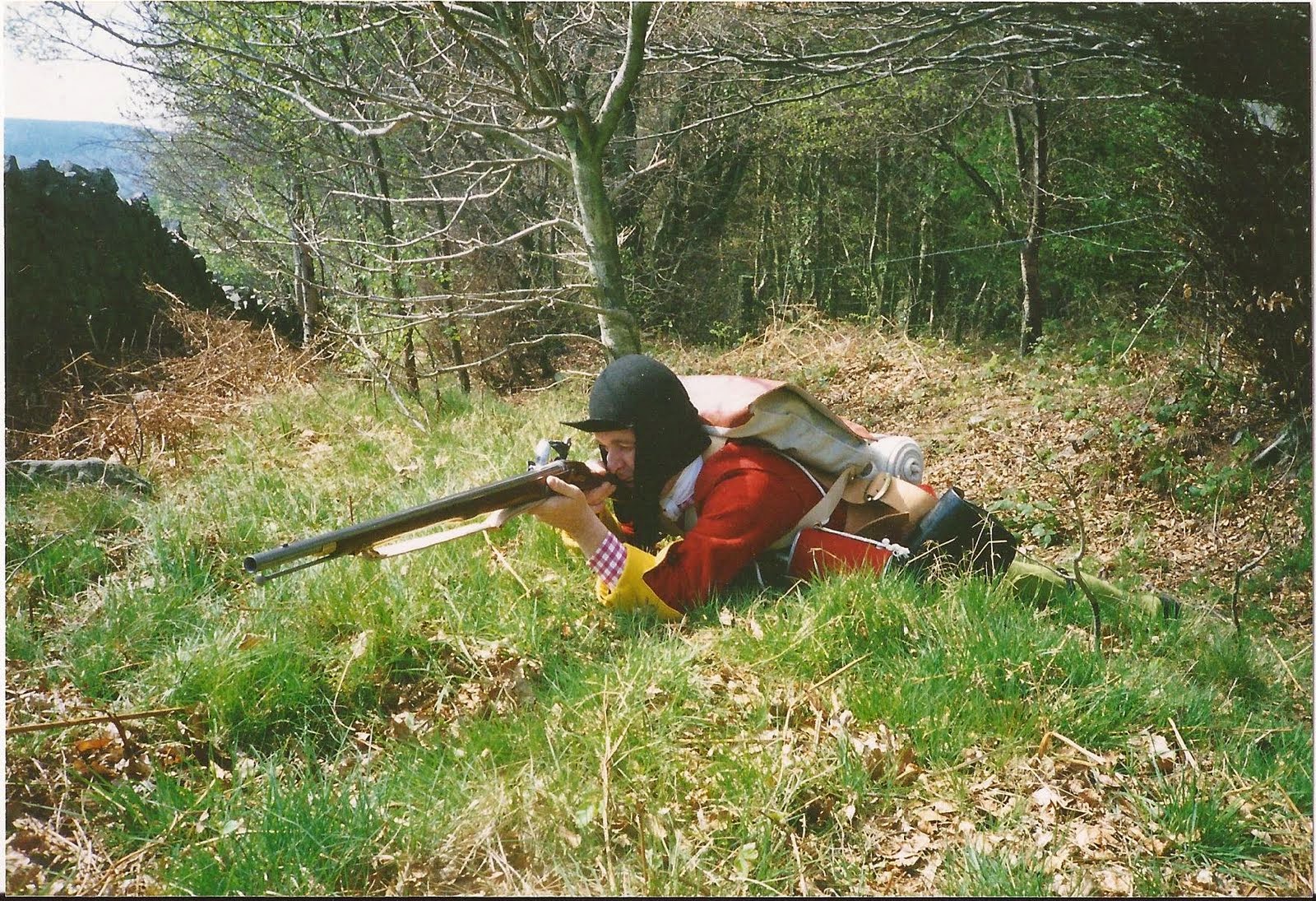 This is a multiperiod group that specialises in different eras - the ones that concern this blog are an excellent Light Infantry project for the F&I and Revwar. Check them out

A pair of Redcoat paintings from the National Army Museum 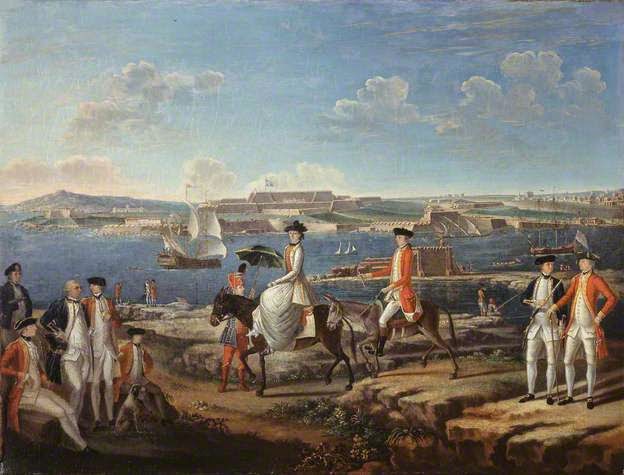 Lady Johnstone, Wife of the Governor of Menorca, Accompanied by Officers of the 25th Regiment of Foot and the Royal Navy, and a Naval Seaman
by Giuseppe Chiesa 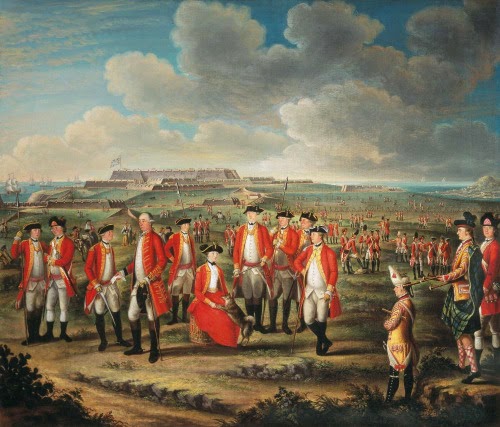 Lady Louisa Lennox with Her Husband’s Regiment, 25th Regiment of Foot (with Lord George Lennox beside her, and Fort St Philip, Port Mahon, in the background)
by Giuseppe Chiesa
- February 24, 2015 4 comments:


As today is the anniversary of Steuben's arrival at Valley Forge here's a clip which shows his influence.
- February 23, 2015 No comments:

The Aim of British Soldiers

Article from All things liberty here
- February 23, 2015 No comments: 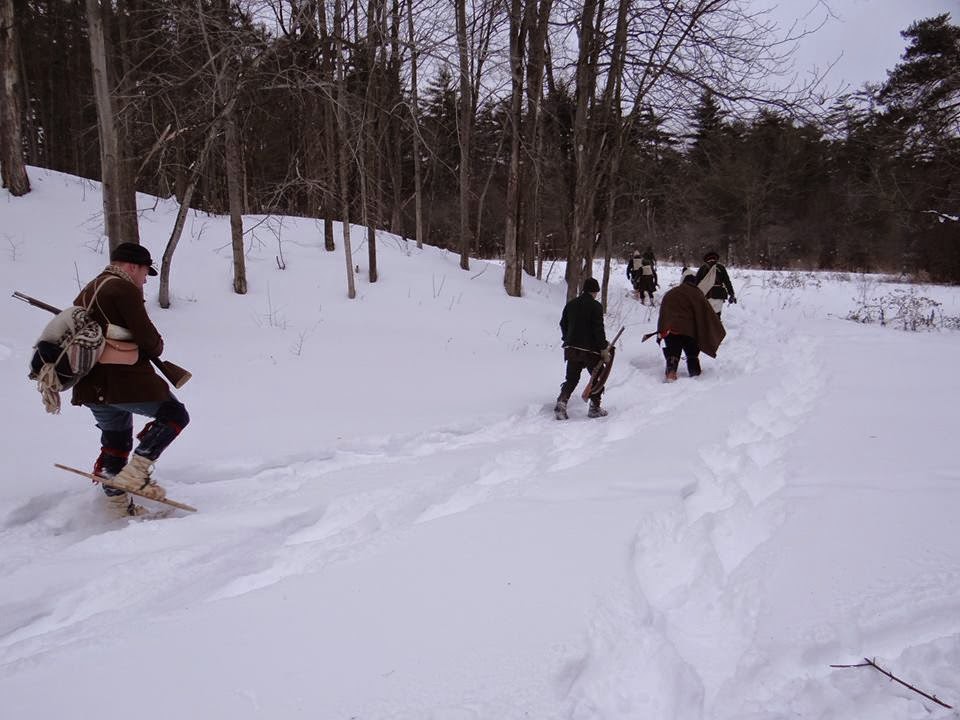 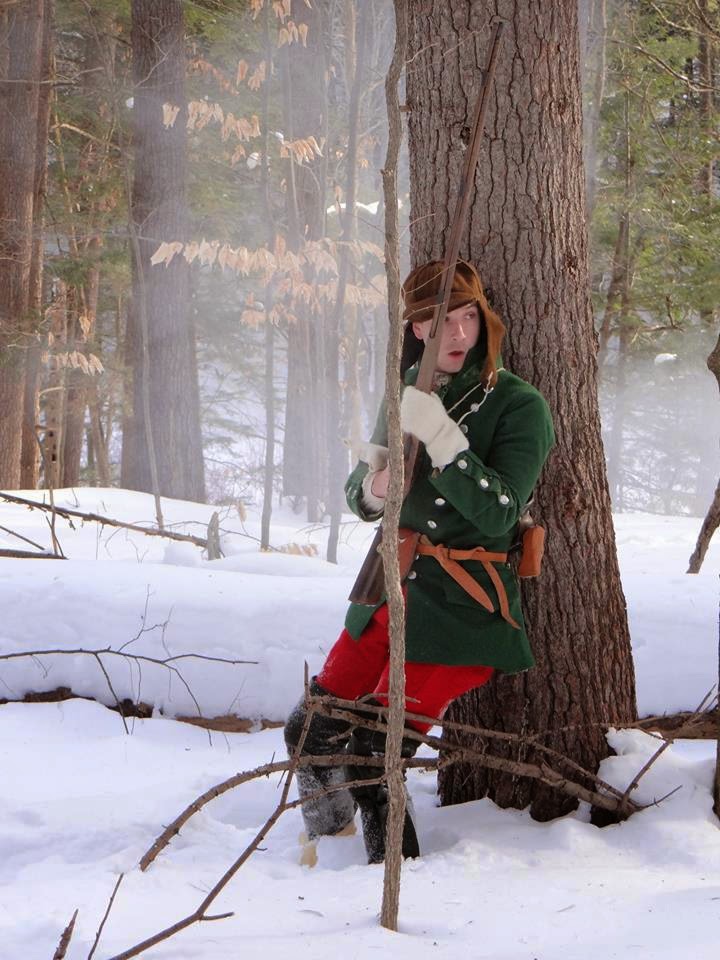 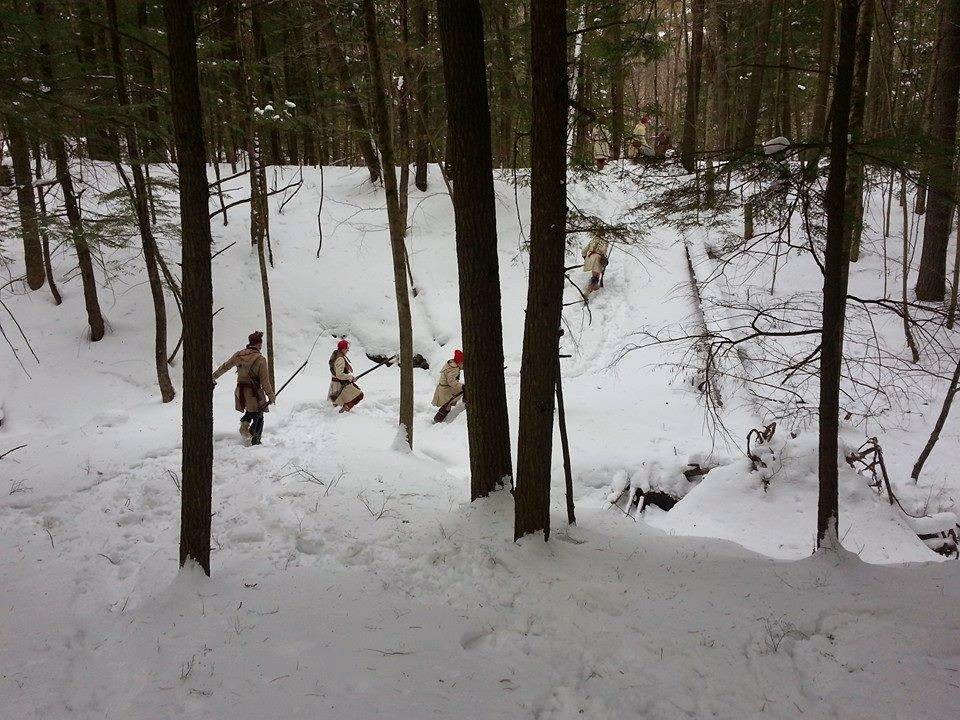 'A morning patrol from Fort Carillon begins the Battle on Snowshoes event! '
Photo thanks to Ward Oles. Event details
- February 21, 2015 No comments: 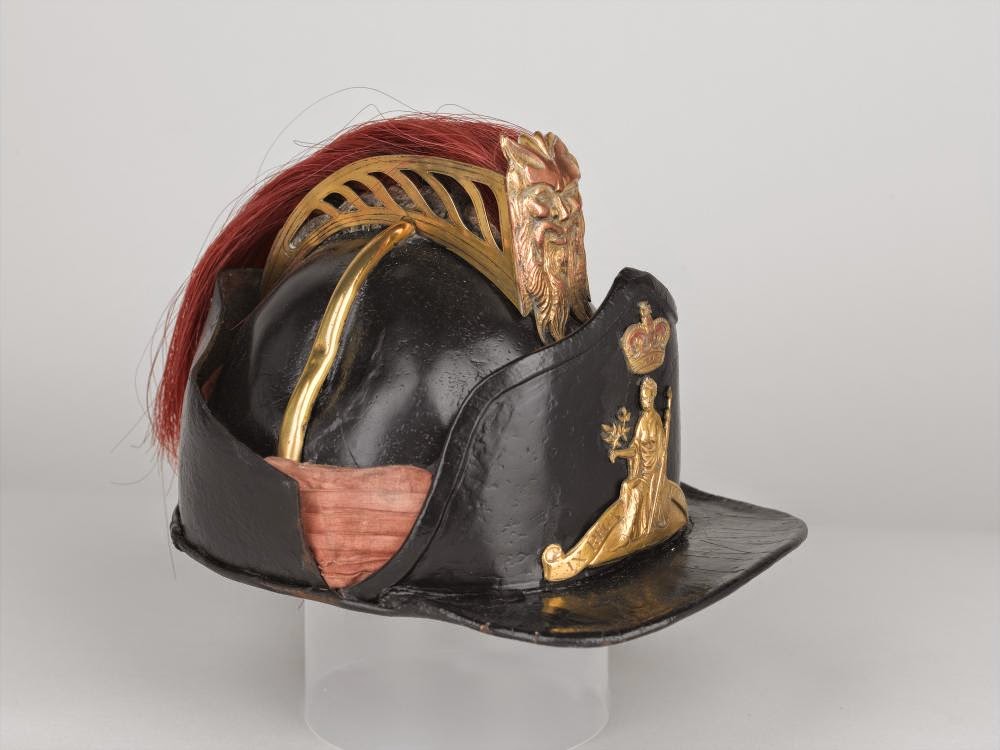 from here also a description and zoomable version
- February 18, 2015 No comments: 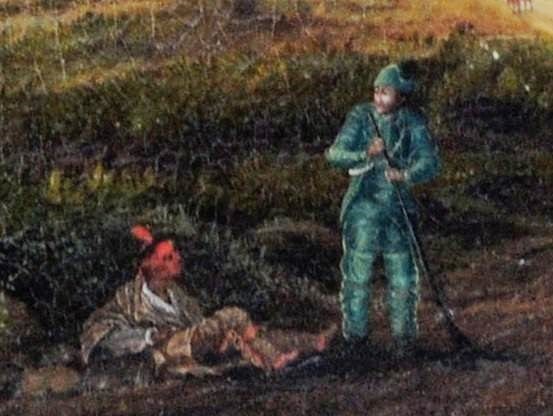 As You Prepare for Fort Ticonderoga’s Battle On Snowshoes Re-enactment: What You May Not Have Known About Bobby and His Buddies…

Patriot Militiaman in the American Revolution 1775–82 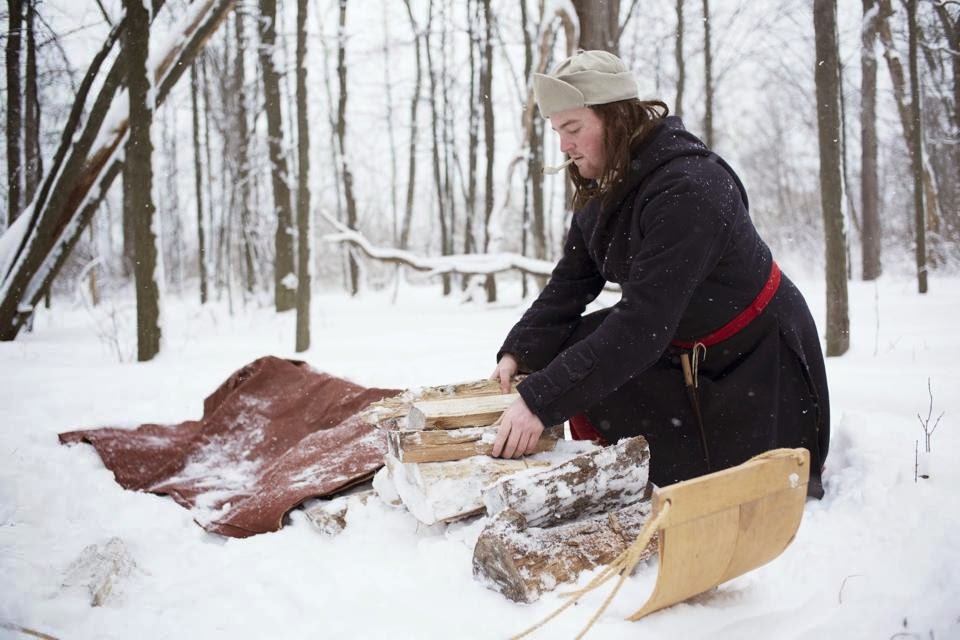 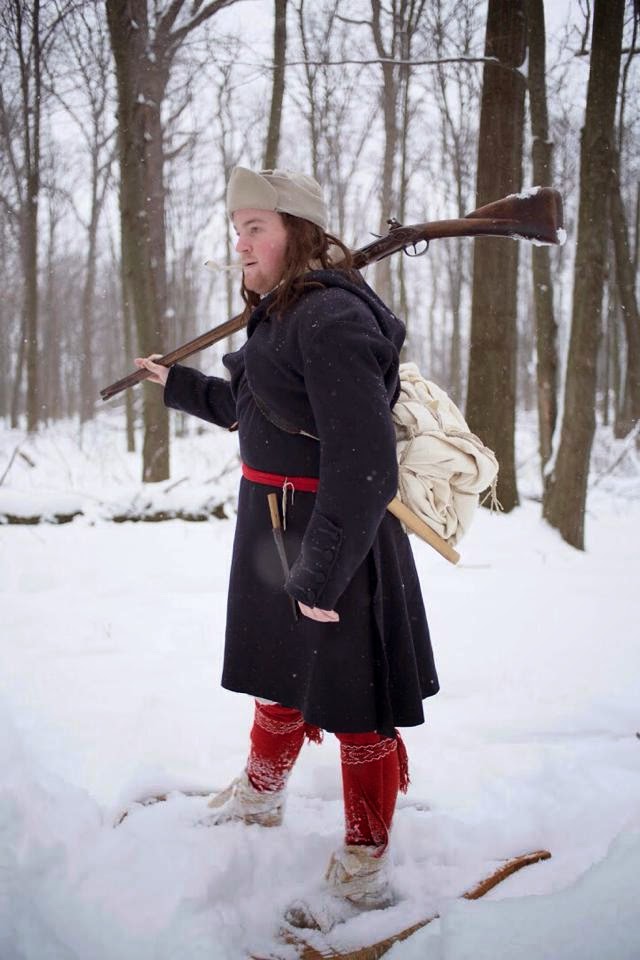 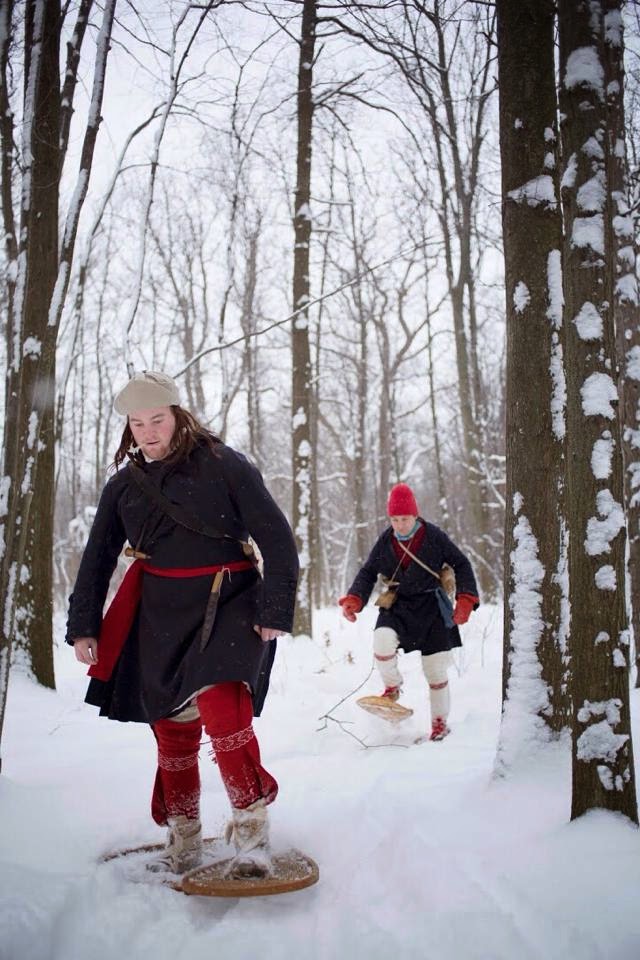 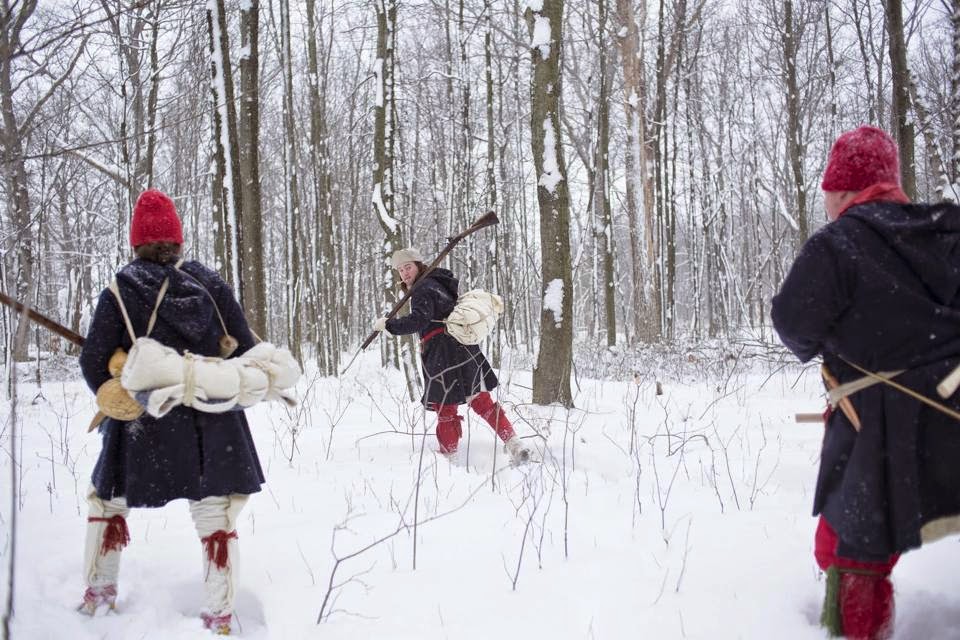 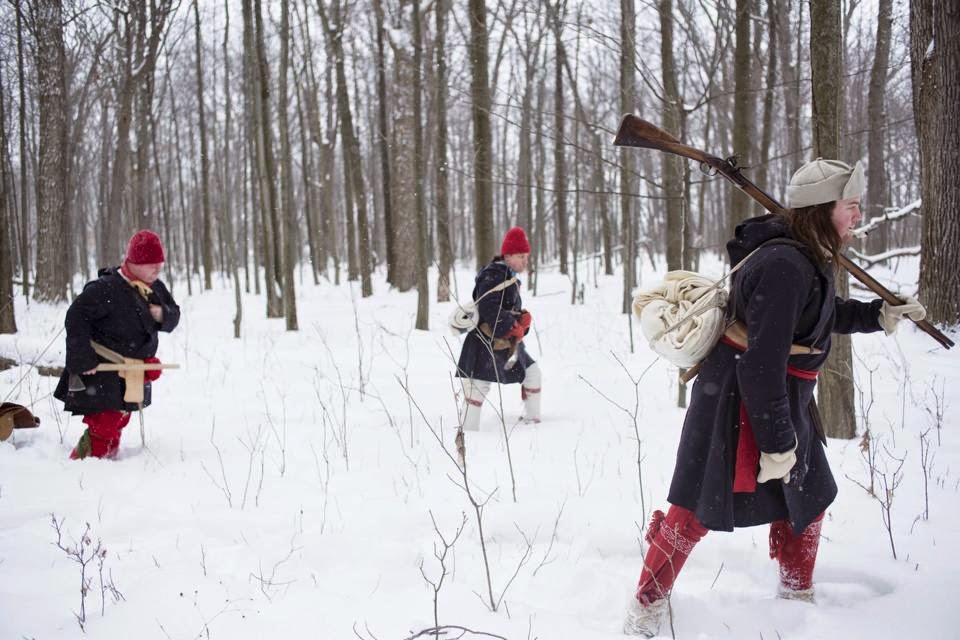 The other Battle on Snowshoes

21 March - Bristol Vermont.
This is a recreation of the March 13, 1758 Battle on Snowshoes, between Robert Rogers' scouting party and Ensigns Langis' and Durantaye's war party. For more on the history, visit the unit's website: https://sites.google.com/site/lacompagniedelangis/about-us

This year, the recreated battle will take place on the Layn Farm in Bristol, VT. This is the same field-and-woods site that we regularly return to every couple of years--the EALR's firing range, for the EALR members.
Unit commanders, as per Jim Ross' instructions: "the scenario will be unveiled to all at inspection. Have all firelocks well cleaned and appropriately appointed ( Stall and Guard). Snow shoes will be required this year. Bring a lunch and plenty of rounds." 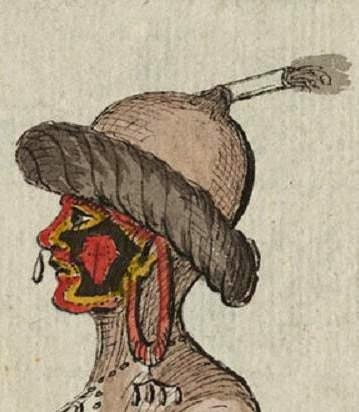 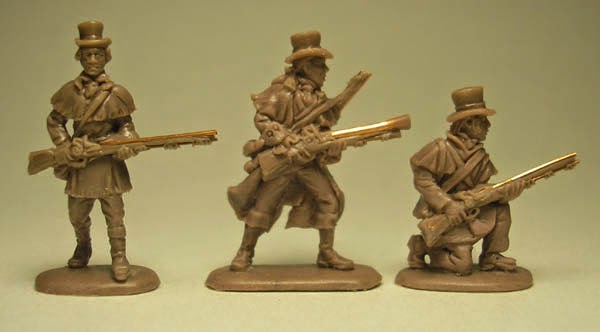 Email ThisBlogThis!Share to TwitterShare to FacebookShare to Pinterest
Labels: War of 1812, wargames 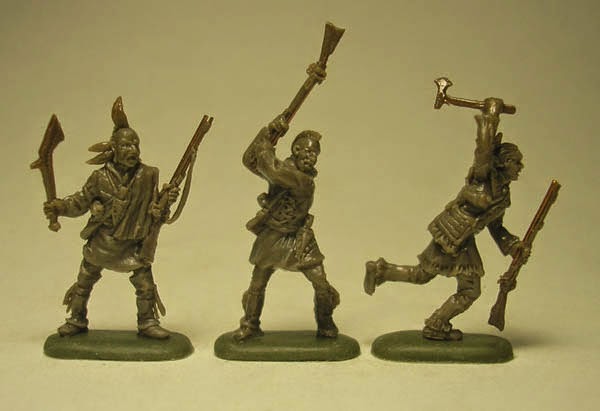 Thanks to Thomsomfeld for finding out about this forthcoming plastic set. Pretty exciting. Masters here
- February 13, 2015 3 comments:

Email ThisBlogThis!Share to TwitterShare to FacebookShare to Pinterest
Labels: first nations, War of 1812 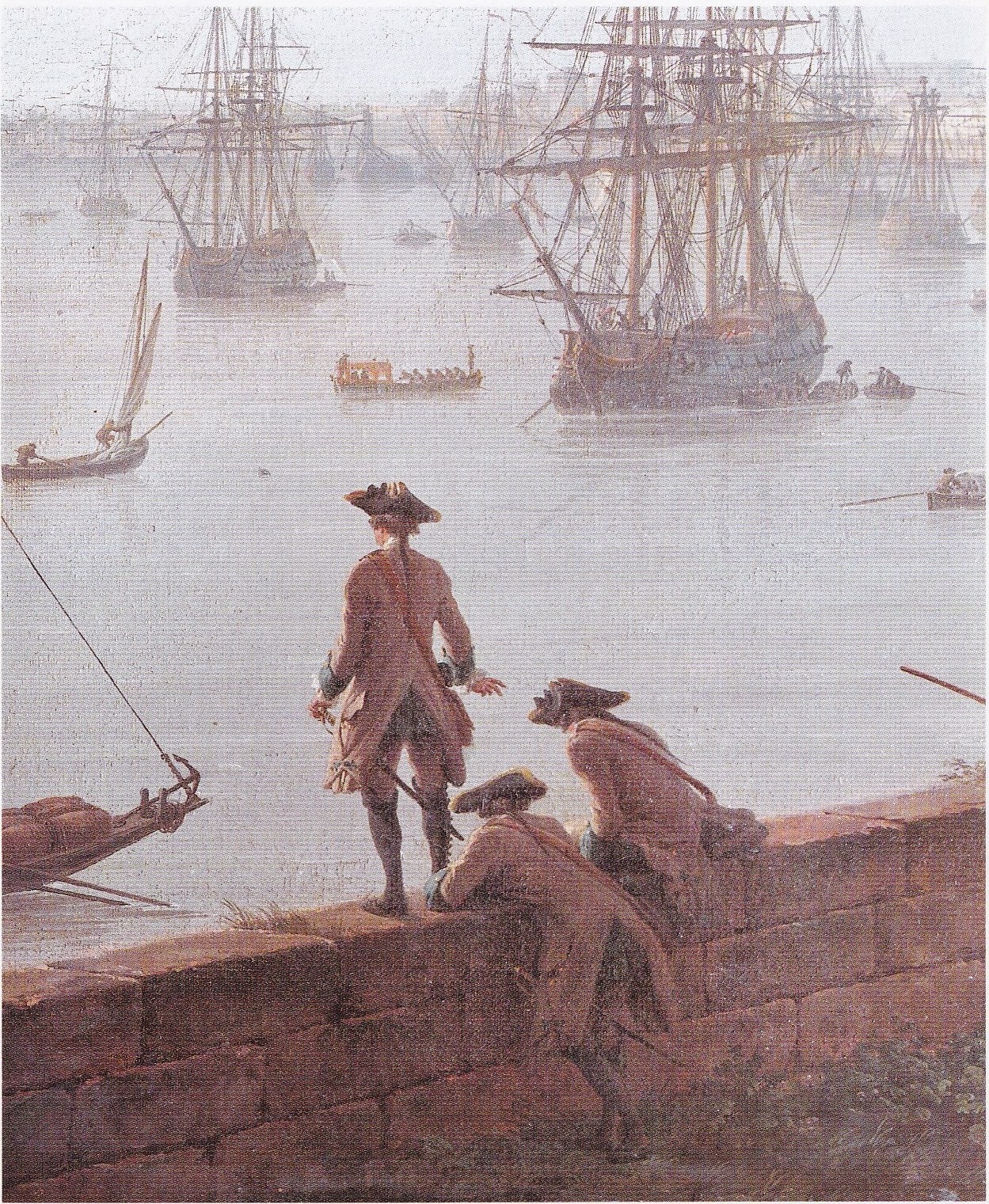 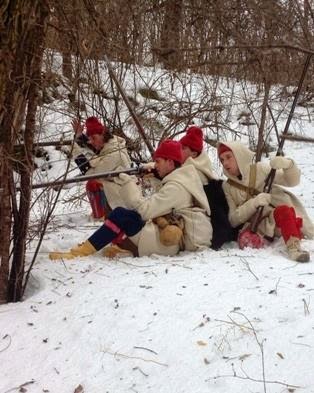 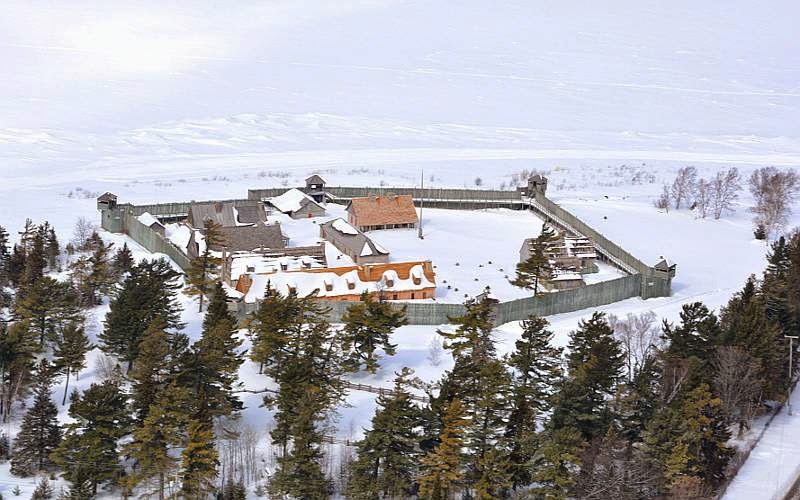 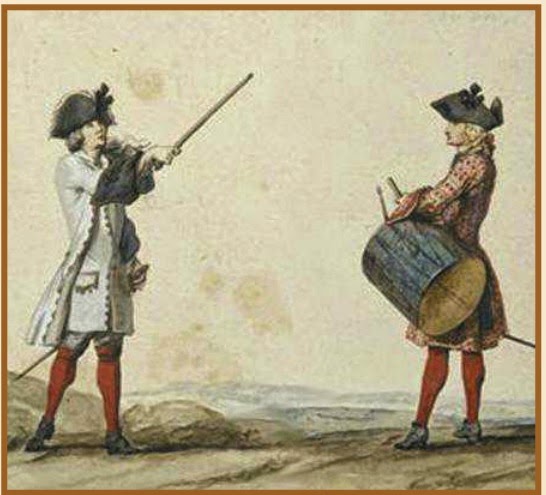 Gearing up for Snowshoe Patrol on Saturday, February 7th. Activities from 11am to 4pm. Check out our website for a full schedule of events
www.oldfortniagara.org. 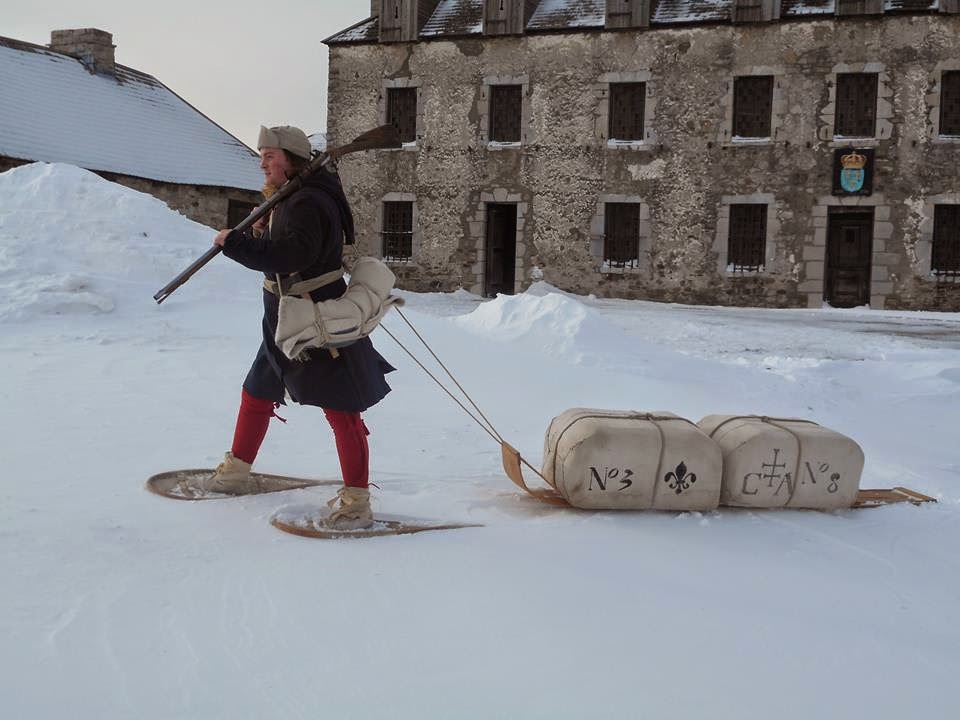 Canadien Going to War on Snowshoes 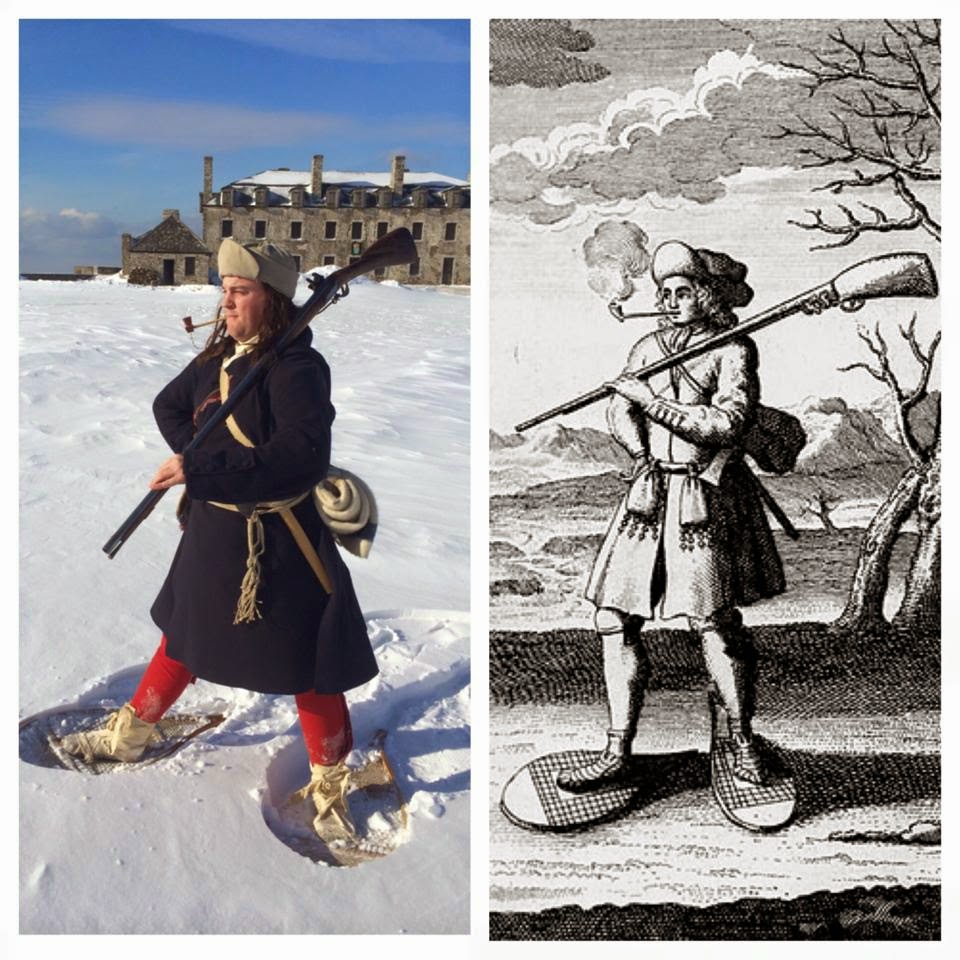 thanks to Ryan Richard for this excellent reconstruction.

THE GEOMETRY OF WAR: FORTIFICATION PLANS FROM 18TH-CENTURY AMERICA