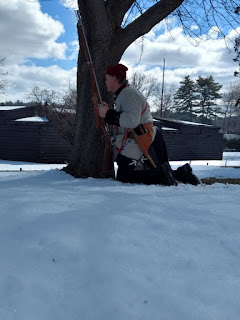 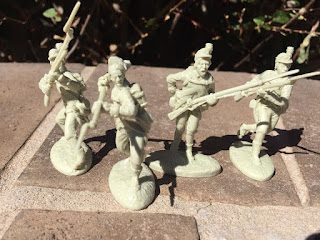 Go to their Facebook page for more photos.  They say

No snow but an interesting set of films to celebrate the 260th anniversary of the Battle on Snowshoes
- March 13, 2018 No comments:

Rogers Rangers fans will know that today is the anniversary of this famous skirmish.
- March 13, 2018 No comments:

There's a pleasant Facebook group called Wargaming King Philips War  in which one of the group recommended these. 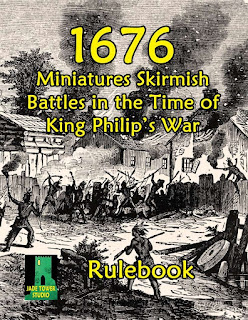 Here's an interesting book
Fought in New York, New England, and Canada, the conflict that began the long French and English struggle for the New World While much has been written on the French and Indian War of 1754–1763, the colonial conflicts that preceded it have received comparatively little attention. Yet in King William’s War, the first clash between England and France for control of North America, the patterns of conflict for the next seventy years were laid, as were the goals and objectives of both sides, as well as the realization that the colonies of the two nations could not coexist. King William’s War actually encompassed several proxy wars being fought by the English and the French through their native allies. The Beaver Wars was a long running feud between the Iroquois Confederacy, New France, and New France’s native allies over control of the lucrative fur trade. Fueled by English guns and money, the Iroquois attempted to divert the French fur trade towards their English trading partners in Albany, and in the process gain control over other Indian tribes. To the east the pro-French Wabanaki of Maine, Nova Scotia, and New Brunswick had earlier fought a war with New England, but English expansion and French urgings, aided by foolish moves and political blunders on the part of New England, erupted into a second Wabanaki War on the eve of King William’s War. Thus, these two conflicts officially became one with the arrival of news of a declaration of war between France and England in 1689. The next nine years saw coordinated attacks, including French assaults on Schenectady, New York, and Massachusetts, and English attacks around Montreal and on Nova Scotia. The war ended diplomatically, but started again five years later in Queen Anne’s War. A riveting history full of memorable characters and events, and supported by extensive primary source material, King William’s War: The First Contest for North America, 1689–1697 by Michael G. Laramie is the first book-length treatment of a war that proved crucial to the future of North America.
- March 05, 2018 1 comment: 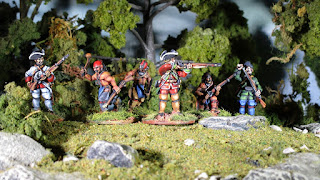 Figures from the collection of and painted by Scott Lesch. Manufactured by Expeditionary Force. They also do British Marines. These with the Armies in Plastic Woodland Indians could make for an interesting game.
- March 03, 2018 No comments: