CBT: Seminole Warrior vs US Soldier

During the 19th century, US forces confronted the Seminole people in a series of bitter wars over the fate of Florida. After the refusal of the Seminoles to move west to the Creek Reservation in Mississippi, the US government sent troops to bring Florida under federal control, marking the beginning of the Second Seminole War. On December 23, 1835, troops led by Major Francis Langhorne Dade were ambushed and massacred en route to Fort King. Two years of guerrilla warfare ensued, as the Seminoles evaded the US forces sent to defeat them. Ordered to hunt down the Seminoles, a US force led by Colonel Zachary Taylor incurred heavy losses at the battle of Lake Okeechobee (December 25, 1837), but the Seminoles were forced to withdraw. At the battle of the Loxahatchee River (January 24, 1838), forces led by Major General Thomas S. Jesup  encountered a large group of Seminoles and met them with overwhelming numbers and greater firepower. Despite their stubborn efforts to resist the US military, the Seminoles were defeated and Florida became a state of the Union in 1845. This fully illustrated study assesses the forces fighting on both sides, casting light on the tactics, weaponry, and combat record of the Seminole warriors and their US opponents during the Second Seminole War.

There is a more detailed description on Kronoskaf

Major-General Robert Monckton at the Taking of Martinique, 1762 - read about the campaign on Kronoskaf here 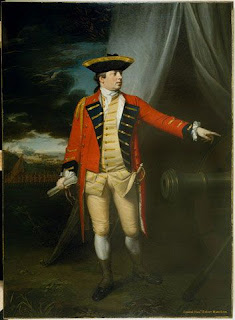 A primer on the standard arms used by British light infantry during the American War for Independence.

We are approaching the anniversary of La Belle Famille battle. Here it is depicted in the movie The Broken Chain 1993.


Killed during the siege of Old Fort Niagara. His wiki says

However, on 19 July 1759 he was killed by being struck in the head with a shell fragment. On the morning of that day, being still dusk, the recently appointed General was inspecting his artillery, when he suddenly stepped in front of a British mortar and was struck on the head by a fragment of shell, which burst prematurely at the mouth of one of their cohorns, and killed him on the spot decapitating him.

Today's anniversary is this French victory.

Photo from the 250th anniversary of the French and Indian War event held in Rome N Y . Photo credit goes to Mike Huchko. 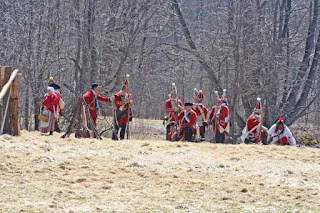 Ulster American Folkpark. My favourite place in the UK to reenact the revwar. Here is their Pennsylvania farmhouse and outbuildings.