Events for the weekend 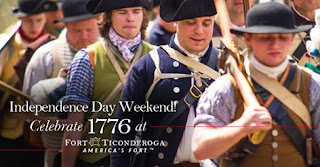 Experience the American fight for liberty at Fort Ticonderoga's three day Independence weekend celebration! Save 10% on your admission and witness historical demonstrations and patriotic performances! 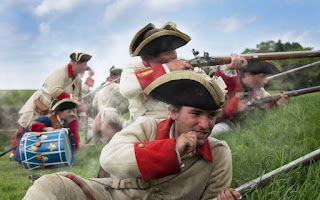 If your last visit to Old Fort Niagara was in 4th grade, it's time to return! Come to the French & Indian War Encampment this Friday through Sunday, July 3-5! Visit French and British living history camps, listen to period music, watch lacrosse and cricket games, invite your children to "enlist" to defend the increasingly threatened French fort. We are your history headquarters!
- June 29, 2015 No comments:

55th and Gage's scouting around Carillon 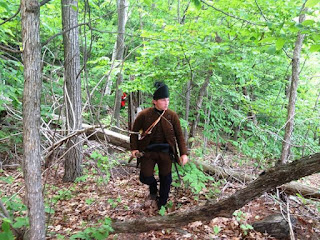 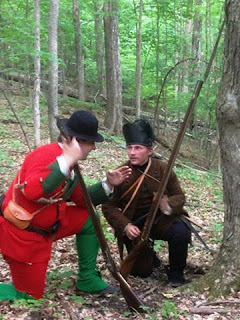 ‪#‎TDiH‬ June 27th & 28th
The Army untill the 4th of July was daily reinforc'd by provincials, and employ'd that time (after being form'd into Brigades) in finishing the two Stockaded Forts, and in Exercising a new Method of fighting, forming, and marching, in the Woods.
-Captain Hugh Arnot, 80th Regt of Light Armed Infantry to Earl of Loudoun, 1 August 1758

See this in action during Fort Ticonderoga's Montcalm's Cross event during the Saturday morning musket demonstration at 11 am! Join us July 18-19 for the full experience! http://www.fortticonderoga.org/…/montcalm-s-cross-th…/detail
- June 28, 2015 1 comment: 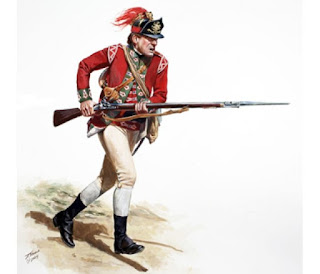 Association of Crown Forces 1776 to change their persona From their Facebook page
'Our appearance at The American Museum in Britain on the weekend of July 4th/5th sees our final attendance in the guise of the Coldstream Guards before our reappearance in the uniforms of the 5th Foot, a massive project that has combined all the dedication, talents and efforts of the members over the past three years. We would like to take this opportunity to thank all of the friends, members and former members of the Society who have supported us since our formation in 1982 and we look forward to seeing you and our new friends as the 5th Regiment of Foot in the future.'
- June 26, 2015 No comments: 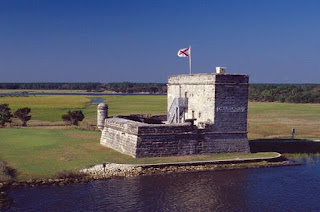 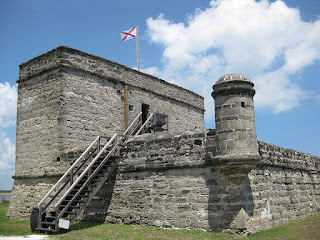 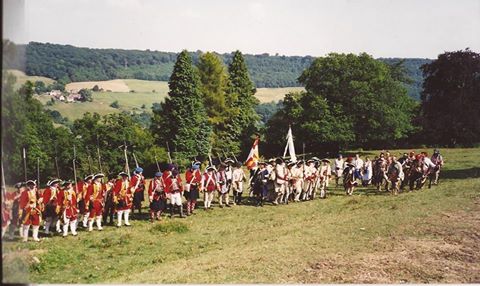 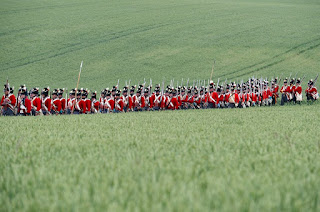 Well it seems to have been a success - well done to those who took part. I feel a little jealous as I used to be a Napoleonic reenactor  - but I am too old now - events like Waterloo are physically demanding - I only did one Waterloo in 1990 and my feet still are sore from all that marching.
Anyway - there's some great photos on this blog
- June 21, 2015 No comments:

Impossible to ignore todays anniversary - the 200th of Waterloo - of course when I reenacted the Napoleonic wars I was on the French side. Anyway as a tribute here's a pretty song on the subject.
- June 18, 2015 No comments: 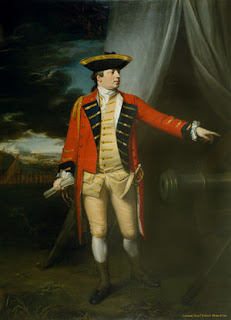 Beginning June 3, 1755, a British army under Lieutenant-Colonel Robert Monckton staged out of nearby Fort Lawrence, besieged the small French garrison at Fort Beauséjour with the goal of opening the Isthmus of Chignecto to British control. Control of the isthmus was crucial to the French because it was the only gateway between Quebec and Louisbourg during the winter months.[2] After two weeks of siege, Louis Du Pont Duchambon de Vergor, the fort's commander, capitulated on June 16.
Wiki on the battle here
- June 16, 2015 No comments: 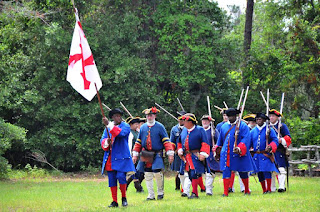 ST. AUGUSTINE, FL – June 15, 2015 – In the early morning hours of June 26, 1740, the village of Gracia Real de Santa Teresa de Mose (mo-SAY), the first, legally sanctioned free black settlement in the continental U.S., became the site of the bloodiest battle in Florida’s part in the War of Jenkins’ Ear. That day saw Florida’s Spanish soldiers, black militia, and native Yamassee auxiliaries locked in a “clash of empires” with invading English and Scottish troops from Georgia, a battle that culminated in desperate, hand-to-hand fighting as Fort Mose, St. Augustine’s northern-most defense, burned around them. The decisive Spanish victory at “Bloody Mose” was one of the factors that ended British Georgia’s invasion of Spanish Florida.
On Saturday and Sunday, June 20-21, 2015, Florida Living History, Inc. (FLH – http://floridalivinghistory.org/ ), along with the Fort Mose Historical Society ( www.fortmose.org/ ), and Fort Mose Historic State Park ( www.floridastateparks.org/fortmose/ ), will host the sixth, annual Battle of Bloody Mose Commemoration. Now expanded to a two-day heritage Event, the award-winning, 275th-anniversary Battle of Bloody Mose historical re-enactment will take place from 10AM to 3PM at Fort Mose Historic State Park – 15 Fort Mose Trail; St. Augustine, Florida; 32084. White, black, and Native American re-enactors and volunteers from across Florida and the Southeast will participate in this heritage Event, presenting living-history demonstrations and interpretations.
•WHEN: Saturday and Sunday, June 20-21, 2015 / 10AM to 3PM
- June 15, 2015 No comments:

An officer of the 21st Royal North British Fuzileers c. 1775. 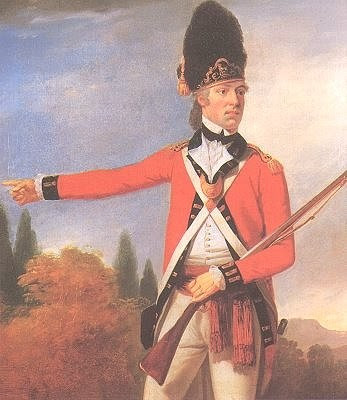 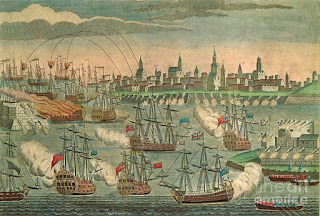 Capture of the 'Alcide' and 'Lys' 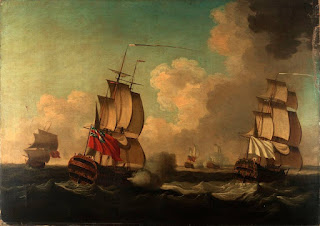 'Today in 1755, a British fleet seizes two French warships bound for Canada, causing the French and Indian War to explode into the Seven Years War.'

War of 1812 blockhouse being built 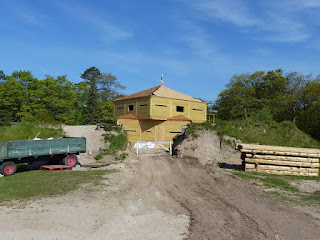 An authentic Journal of the Siege of the Havana. By an Officer. To which is prefixed a plan of the siege, etc 1762 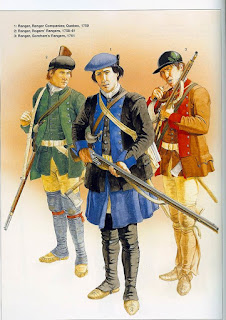 KRONOSKAF entry
In 1762, the regiment was part of Burton's Corps sent from North America to assist the British force already besieging Havana. It arrived in Cuba on June 27 and took part in the siege and capture of Havana suffering heavy losses from sickness during the following months. After the capitulation of Havana, the remaining rangers were drafted into the depleted British regiments.
- June 06, 2015 1 comment: 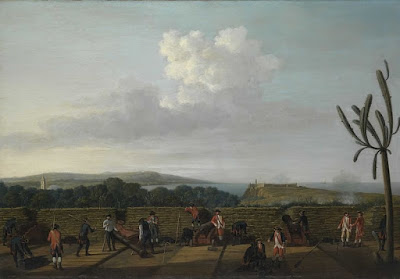 Wiki
British siege guns before Morro Castle
Dominic Serres - National Maritime Museum BHC0410
A depiction of an episode from the last major operation of the Seven Years War, 1756-63. It was part of England's offensive against Spain when she entered the war in support of France late in 1761. The British Government's response was immediately to plan large offensive amphibious operations against Spanish overseas possessions, particularly Havana, the capital of the western dominions and Manila, the capital of the eastern. Havana needed large forces for its capture and early in 1762 ships and troops were dispatched under Admiral Sir George Pocock and General the Earl of Albemarle. The force which descended on Cuba consisted of 22 ships of the line, four 50-gun ships, three 40-gunners, a dozen frigates and a dozen sloops and bomb vessels. In addition there were troopships, storeships, and hospital ships. Pocock took this great fleet of about 180 sail through the dangerous Old Bahama Strait, from Jamaica, to take Havana by surprise. Havana, on Cuba's north coast, was guarded by the elevated Morro Castle which commanded both the entrance to its fine harbour, immediately to the west, and the town on the west side of the bay. The castle was built on rock, with massive rock-cut ditches defending it to landward. It was, however, overlooked by the high ground of the Cabana ridge (Los Cavannos) to the south-east. Despite Spanish defence of the ridge, the British managed to take it and set up a battery there from which to bombard the castle at a distance. This painting shows the inside of the battery, made from a timber platform with a parapet of fascines. The gunners wear blue coats. The Morro Castle can be seen in the distance on the right, with the bell-tower of Havana cathedral on the left. The main harbour lies below, hidden by the trees in the centre.
- June 06, 2015 No comments:

'We are commemorating the battle that took place at George Chicken’s garrison on June 13, 1715, on June 13, 2015, the tricentennial of the battle.   After the battle, he gave the place where they fought and buried bodies to be a chapel of ease to the main parish. See our facebook page for newspaper articles and so forth.'

Re-enactors to commemorate the Battle of Bloody Mose 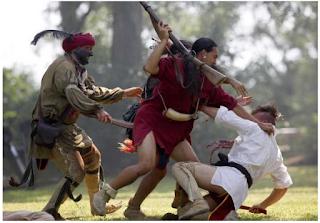 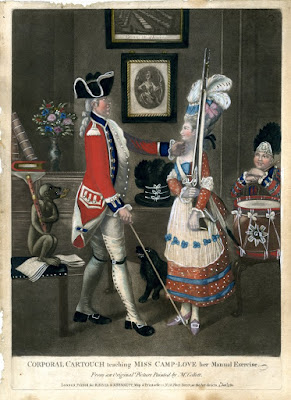 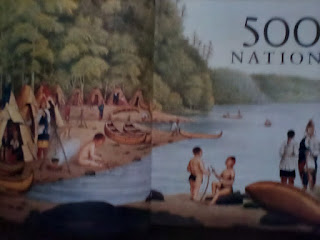