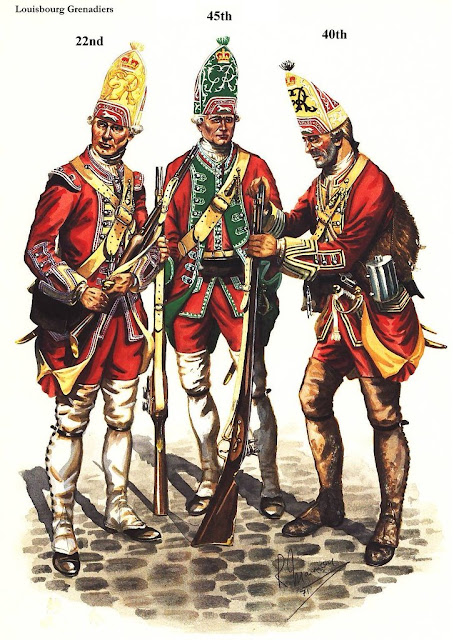 Reconstruction by the Old Barracks Trenton where they were garissoned. 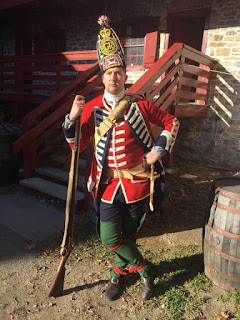 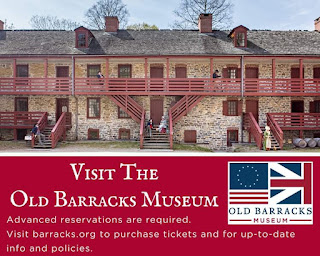 Today the fort fell. Below is from Wikipedia. The photo is from Old Fort Niagara Youngstown NY

The capitulation of Fort Niagara occurred on the same day that French troops abandoned Fort Carillon to an overwhelming British army under General Amherst. Following the surrender of Fort Niagara, the French abandoned other forts in the frontier, recalling garrisons to defend the populated areas of Canada. Forts abandoned by the French includes Fort St. Frédéric (in present day Crown Point) and Fort Rouillé (in present day Toronto). Fort St. Frédéric was destroyed as French troops abandoned Lake Champlain to protect the Canadian heartland. The garrison at Fort Rouillé was instructed to evacuate the area, and burn the fort should Fort Niagara fall. After the British captured Fort Niagara, the French garrison burned Fort Rouillé, and withdrew to Montreal.[3] The remaining French forts in the Ohio and Illinois Country were eventually turned over to British forces. 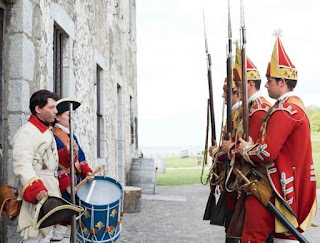 Today's anniversary. This is taken from the excellent Kronoskaf 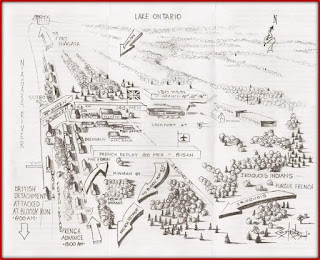 On the morning of July 24, a distant firing told Pouchot that reinforcements were at hand. Aubry and Ligneris parties (about 1,100 French and 1,200 Indians) had left Presqu'isle a few days before. Among them was a body of Compagnies Franches de la Marine but the Frenchmen of the party were chiefly traders and bushrangers from the West. They were excellent woodsmen, skilful hunters, and perhaps the best bush-fighters in all Canada.

Johnson, besides his Indians, had with him about 2,300 men, whom he was forced to divide into 3 separate bodies: one to guard the bateaux, one to guard the trenches and one to fight Aubry and his band. This last body, which initially consisted of the provincial light infantry and the pickets sent forward the previous evening, was reinforced with 2 companies of grenadiers and 150 men of the 46th Foot, and placed under command of colonel Eyre Massey. They took post behind an abattis at a place called “La Belle Famille”, and the Iroquois placed themselves on their flanks. These Iroquois had shown signs of disaffection and, when the enemy approached, they opened a parley with the French Indians, which, however, soon ended, and both sides raised the war-whoop.

Johnson also instructed lieutenant-colonel Farquhar to take position at the tail of the trenches with the 44th Foot and to support the guard commanded by major John Beckwith in case the French garrison should make a sally.

When Pouchot heard the firing, he went with a wounded artillery officer to the bastion next the river and, as the forest had been cut away for a great distance, they could see more than 2 km along the shore. There, by glimpses among trees and bushes, they descried bodies of men, now advancing, and now retreating; Indians in rapid movement, and the smoke of guns, the sound of which reached their ears in heavy volleys, or a sharp and angry rattle. Meanwhile, the British cannon had ceased their fire and the silent trenches seemed deserted. There was a call in the fort for volunteers to sally and destroy the works. No sooner did the volunteers show themselves along the covered way than the seemingly abandoned trenches were thronged with men and bayonets and the attempt was given up. The distant firing lasted half an hour, then ceased. Indeed, the fight had been brisk for a while but at last Aubry's men broke away in a panic. The French officers seem to have made desperate efforts to retrieve the day, for nearly all of them were killed or captured; while their followers, after heavy loss, fled to their canoes and boats above the cataract.

Pouchot remained in suspense till, at 2:00 PM, a friendly Onondaga, who had passed unnoticed through the British lines, came to him with the announcement that the French and their allies had been routed and cut to pieces. Pouchot would not believe him.

At 4:00 PM, after a furious cannonade on both sides, a trumpet sounded from the trenches and major Harvey approached the fort with a summons to surrender. He brought also a paper containing the names of the captive French officers. Pouchot, feigning incredulity, sent an officer of his own to the British camp, who soon saw unanswerable proof of the disaster; for here, under a shelter of leaves and boughs near the tent of Johnson, sat Ligneris, severely wounded, with Aubry, Villiers, Montigny, Marin, and their companions in misfortune, in all, 16 officers, 4 cadets, and 1 surgeon.

Review: 1754: Conquest – The French and Indian War from Academy Games

Board Game that has good things said about it - check it out.
Apparently there is a digital version on Steam.
- July 23, 2020 1 comment: 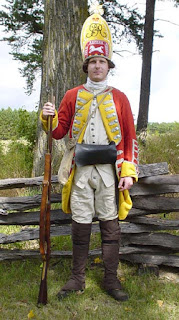 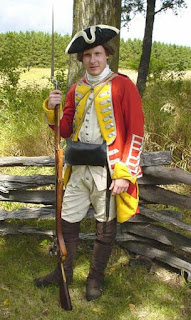 Today is the anniversary of Monongahela 1755 so I thought I would feature these reconstructions from the 44th foot in their Braddock modified uniform. More here
- July 09, 2020 No comments: