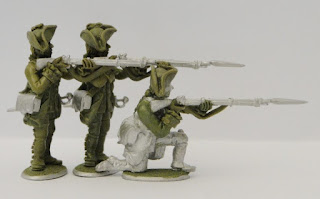 Here for 28mms.
I must admit to being very impressed with these Black Hussar French - wonder how they line up with the Galloping Major F&Is?
- July 29, 2015 No comments: 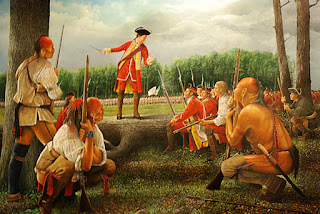 This weekend is the anniversary of the fall of Niagara to the British. Yesterday was the Battle of La Belle Famille which a French relief attampt was defeated by the British and Iroquois and today and tomorrow are the surrender and capitulation. Read more about this campaign here
- July 25, 2015 No comments: 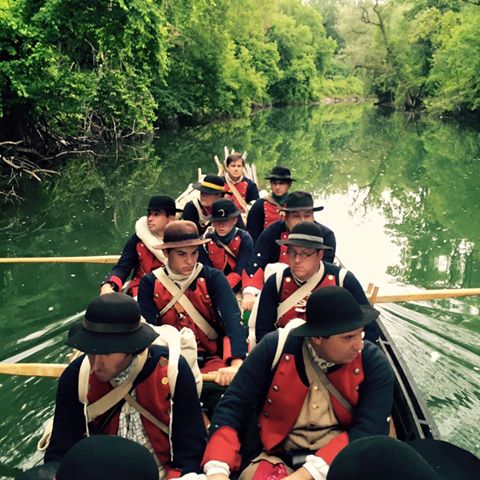 Superb photos from this weekend's reenactment 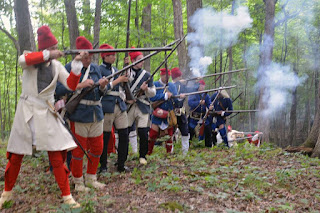 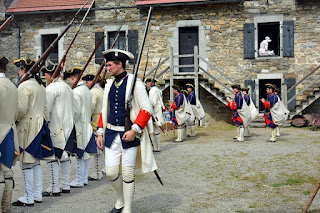 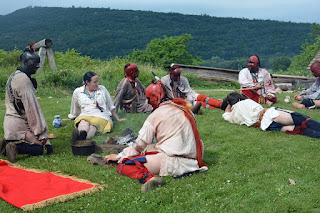 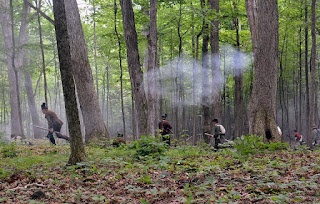 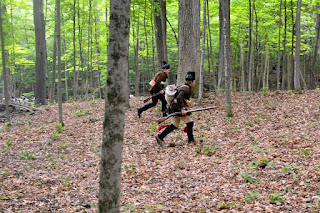 You are in luck! In case you missed the action yesterday at ‪#‎MontcalmsCross‬ Battle Reenactment we have more today! Gates open at 9:30am. So much going on all day! http://www.fortticonderoga.org/…/fort-ticonderoga-recreate…/
- July 19, 2015 No comments: 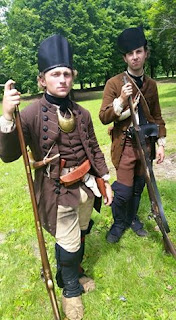 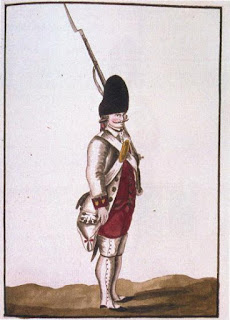 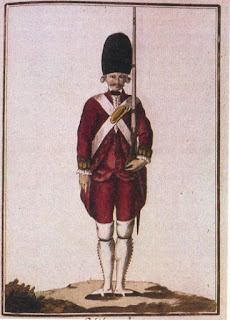 From this weekend's Fort Ti reenactment 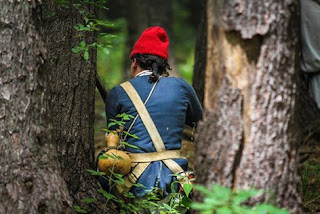 #MontcalmsCross Battle Reenactment begins...
"About four o'clock in the evening we heard a great burst of musketry fire and we perceived an hour later the remains of this unfortunate detachment pursued by the English. A few companies of grenadiers at once crossed the rapids at the Falls to lessen the pressure of the enemy's pursuit, and several of our people, favored by their fire, got across by swimming. We lost out one of our detachment, Sieur de Trepezec, dead the next day from his wounds. Wieur Bonneau, captain in Guyenne, La Rochelle, lieutenant in the same regiment; Bernard, lieutenant in La Reine, Jaubert, lieutenant in Bearn, and 150 soldiers or Canadians killed or prisoners. The enemy suffered a considerable loss there in the person of Milord Howe, who was killed. He was brigadier general and showed the greatest talents, although still in his youth. he had above all in the greatest degree those two qualities of heroes, activity and audacity. He it was who had projected the enterprise against Canada and he alone was capable of executing it. He was marching toward us when Sieur de Trepezec's detachment ran blindly into his column. At the first shots he ran up and was killed dead. His death stopped the advance. The disheartened English gave us twenty-four hours' delay, and this precious time was the saving of us and of the colony." Journal of Louis Antoine de Bouganville July 6, 1758
- July 18, 2015 No comments:

Once a year, the Tomahawk Studio tries to put up with our friends and testers much of Muskets & Tomahawks, and this year with a table 3m by 1.80m and more than 300 figures, it was really impressive. The lines to follow are written by Alex Buchel. 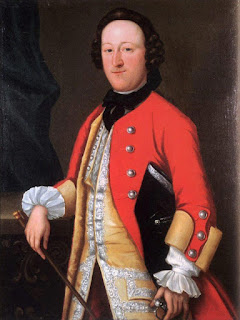 Kronoskaf entry
Not sure if this is Phyneas Lyman or not - found it on the excellent page of 1st Conecticut Provincials
- July 14, 2015 1 comment:

General orders of 1757; issued by the Earl of Loudoun and Phineas Lyman in the campaign against the French


GENERAL ORDERS OF 1757 By Phinehas Lyman Esq*"-' Maj""- Gen^^- and Colonel of the Troops Raised by ye Colony of Connecticut To act in Conjunction with His Majesty's Ragular Troops, Under the command of His Ex- celency y^ Earl of Loudoun, y^ Next Campaign. Order'd That the Two Companys Quartered By ye River Mount a Guard to consist of one Subaltern Two Sergeants 2 Corpo- rals I Drum""- & Forty Private men To Keep out ten Sentinels To be Relieved Every Two Hours. That the Two Companys Quartered at or near Hogaboom's Do ye Same.
GENERAL ORDERS OF I757 That Capt Putnam's Company Mount a Guard To Consist of one Searj^- one Corp^- & Twenty Men To Keep out Five Senterys to Be Relieved as Above. All y^ guards to Be Relieved at y^ Beat of the Troop at 9 o'Clock in y^ Morning. That y^ Drums all Beat ye Reveille at Half After Four oclock in y^ Morning & Every Company Turn out immediately & Parade on ye Places of Rendezvous where y^ officers are to Meet and Call them over & See that y^ Men are all clean & well Dress'd & to Note Every Defect, & that Every man Dress Neat & Clean when on Duty. That y^ Commanding officers of Each company See that their Men are Exer- cised from ten to twelve oClock A.M. and from Four to Six P: M:, that the Places of Parad are Kept clean and Neat. That the Drums Beat ye Tattoo at Seven oClock at Night & Every Company to turn out on ye Paraid. The officers to Meet eiri and call em over & as soon as Dismised Every man to Return to His Quarters & Not to Be Absent without Leave & to Keep still & Behave Orderly. That No officer or Souldier Goes out of Town without leave from y^ Com- manding officer. That y^ officers Take care to Be Punctual to the Exact time of Performing Every order, & to see That y^ Souldiers Do y^ Same, & By No Means To Get into a Loose way of Doing Duty. That a Return Be Made this Day of Each Company Arrived at Claverack. That for Every Breach of order y® Offender Be Confined & a Report thereof to Be Made By y^ officer of y^ Guard as Soon as Relieved. Given Under My Hand at Fondie's in Claverack y^ 2""^ Day of May 1757
- July 14, 2015 No comments:

Join us July 18th and 19th, 2015 to discover how 257 years ago, the Battle of Carillon sealed the reputation of Ticonderoga for generations to come. Stand with the loyal and courageous French soldiers that defended the French lines against all odds, and meet the British and Provincial soldiers who gave their all to drive the French from the rocky peninsula and fortress of Ticonderoga.

Under the warm July sun, French soldiers gazed out from between sandbags atop the breastwork of logs they had hastily constructed over the past two days. Behind them stood the Marquis de Montcalm, a general used to doing the impossible in Canada and the mountains of Italy. With woolen vestes packed away, wearing the white coats of France, each French soldier double-checked his stockpile of loaded muskets and hoped for a miracle to defend New France from a British onslaught. Sweat beading up on their brows, they looked over tangled branches and a forest of mere stumps. With piercing eyes they looked over the top of the stacked logs and began to see blazing musket fire explode as the largest single day of battle yet in the history of North America began.
Three days prior, the largest military force ever assembled in North America embarked by bateaux down Lake George, leaving the ruins of Fort William Henry to invade New France from the south. At Fort Carillon, 3,700 French soldiers, Canadian milice, and native warriors stood to defend French soil in the New World. Abercromby’s army of British and Provincial soldiers landed at the north end of Lake George, after a long night packed into the fleet of bateaux. Sweeping through the La Chute valley, Brigadier General Lord Augustus Howe and the advanced guard encountered a lost patrol of French soldiers. In the ensuing confusing battle Lord Howe was shot through the chest, and killed on the spot. The death of this leader, known as the darling of the army, struck a blow to British morale and tactical command.
In spite of Lord Howe’s death, British and Provincial soldiers dug in along the La Chute River and General Abercromby prepared to assault the Heights of Carillon. Abercromby's intelligence led him to believe that the Marquis de Montcalm’s soldiers had prepared merely a defensive abatis, which could easily be taken. Early in the morning of July 8th, General Abercromby moved regulars, provincials, and rangers into position to attack the Heights of Carillon. By this plan, three columns of British and provincial soldiers would attack three sides of the French lines in unison. Instead, individual regiments rushed forward, dissipating their immense numerical advantage. What was supposed to be a well-coordinated attack soon fell apart. The French kept up a consistent fire on the attacking force, pinning many of the British soldiers down, forcing them to hide behind stumps of trees and the bodies of their fallen comrades. David Perry, a Massachusetts provincial soldier, described his perilous situation that July day.

It happened that I got behind a white-oak stump, which was so small that I had to lay on my side, and stretch myself; the balls striking the ground within a hand's breadth of me every moment, and I could hear the men screaming, and see them dying all around me. I lay there some time. A man could not stand erect, without being hit, any more than he could stand out in a shower, without having drops of rain fall upon him; for the balls came by hands-full.

The outcome looked grim for the few attackers who made it to the abatis. Rushing over the bare no-mans-land, they attempted to cut and force their way through the sharp entangled branches, facing clouds of lead bullets. After seven hours of fighting, the battlefield was littered with the dead and dying, and with dusk encompassing the battlefield a disorganized retreat south ensued for the British and provincial soldiers. The retreating soldiers brought with them the story of this great battle, taking the name Ticonderoga home to taverns and newspapers in America and Britain. This fight for the Heights of Carillon at that time was the single most-bloody day in American history, and gave Fort Carillon a formidable reputation. Having held the French Lines for one day, French soldiers continued to dig in, preparing for a second day’s attack. Their somber celebration for the day’s victory was a single cross raised high behind the French Lines. The Marquis de Montcalm ordered this cross raised as thanks for their miraculous victory, even as they prayed for another such miracle. News of this miraculous victory reached France by the fall of that year. On October 1st, 1758 the French army staged a reenactment of the battle, to accompany fireworks to celebrate in front of Paris city hall.
- July 13, 2015 No comments: 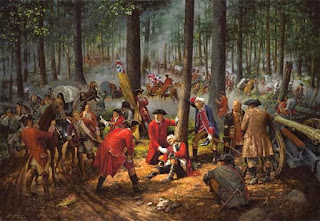 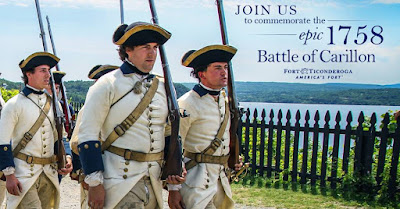 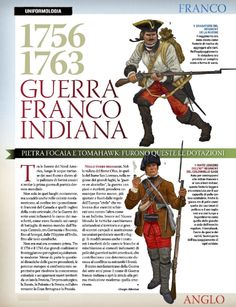 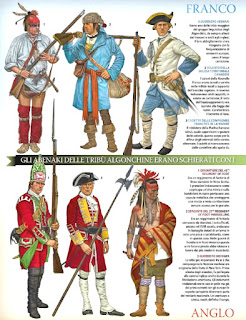 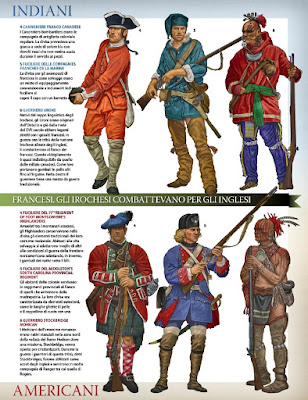 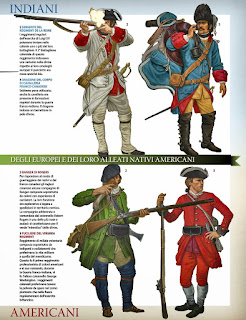 magazine from which these images are from here
- July 04, 2015 No comments: