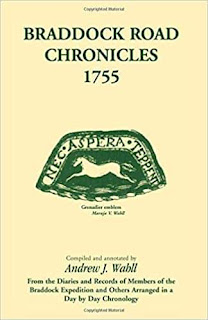 Published by Heritage books. It's a great book if you have an interest in the Braddock expedition. 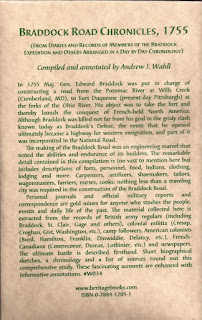 Braddock Road Chronicles, 1755 (From the Diaries and Records of Members of the Braddock Expedition and Others Arranged in a Day by Day Chronology) - Andrew J. Wahll. In 1755 Maj. Gen. Edward Braddock was put in charge of constructing a road from the Potomac River at Wills Creek (Cumberland, MD), to Fort Duquesne (present-day Pittsburgh) at the forks of the Ohio River. His object was to take the fort and thereby launch the conquest of French-held North America. Although Braddock was killed not far from his goal in the grisly clash known today as Braddock's Defeat, the route that he opened ultimately became a highway for western emigration, and part of it was incorporated in the National Road. The making of the Braddock Road was an engineering marvel that tested the abilities and endurance of its builders.

The remarkable detail contained in this compilation is too vast to mention here but includes descriptions of forts, personnel, food, Indians, clothing, lodging and more. Carpenters, artificers, shoemakers, tailors, wagonmasters, farriers, nurses, cooks: nothing less than a traveling city was required in the construction of the Braddock Road. Personal journals and official military reports and correspondence are gold mines for anyone who studies the people, events and daily life of the past. The material collected here is extracted from the records of British army regulars (including Braddock, St. Clair, Gage and others), colonial militia (Cresap, Croghan, Gist, Washington, etc.), camp followers, American colonists (Burd, Hamilton, Franklin, Dinwiddie, Delancy, etc.), French-Canadians (Contrecoeur, Dumas, Lotbinier, etc.) and newspapers. The ultimate battle is described firsthand. Short biographical sketches, a chronology and a list of sources round out this comprehensive study. These fascinating accounts are enhanced with informative annotations. Maps and illustrations are included.
Posted by Ralphus at 03:58